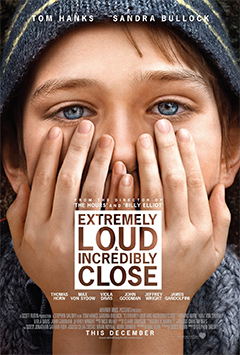 Stephen Daldry’s films have so far been consistent favorites among the Academy during award season. Billy Elliot, The Hours, and The Reader have all been criticized, but none of their nominations have been quite as surprising and controversial as the ones for his latest film, Extremely Loud and Incredibly Close.

Thomas Horn plays Oskar Schell, a very curious boy whose father passed away on 9/11. One day, he comes across a key inside of an envelope mysteriously labeled “Black.” This discovery sets him off on an adventure, as he searches all around New York for clues to where this key might lead, in hopes that it will somehow bring him closer to his dead father.

I will not hesitate to expose my bias in saying that I am a big fan of Jonathan Safran Foer’s novel of the same name. The narrative at the film’s core is truly fascinating, but almost everything else about Daldry’s cinematic interpretation is an unfortunate mess. The film’s biggest flaw is probably its main character, Oscar, who has been written into an insufferable child. One cannot place the blame on Horn because he works well with the poor material he is given and does a decent job at portraying a child suffering from social anxiety.

Schell’s many interesting quirks within the novel just do not fit well into the approach that Eric Roth took with the screenplay. He and Daldry illustrate the boy’s various ticks and issues through annoying scenes where one almost wants to yell at him until he shuts up. A series of frustrating voice-overs do not help to improve this grating character, either, as they just never seem to stop. It is a damn shame that this is what we are given, but on the other hand, the movie would have to be much longer to form the right character.

Another burden on the film is the artificial sentimentality that comes along with its uneven exploitation of 9/11. What should be a simple fact that lingers in the background becomes an unnecessary story arc in which Schell keeps six voicemails that his father left from the World Trade Center to himself, but feels the need to bring it up to every stranger he meets. This is not to say that Extremely Loud and Incredibly Close does not have a few positive qualities, specifically in the supporting performances from a big cast of small roles.

Tom Hanks is charming in his five minutes of screen time as Schell’s father, but he is barely existent aside from the constant whining from his son. As for Sandra Bullock, who plays his mother, this role actually brings out a decent performance that shows more depth than expected. Max Von Sydow makes his wordless performance count, but it is so limited that one wonders why he was nominated for supporting actor over other worthy candidates. The stunning Viola Davis delivers the best work in the movie, showing more versatility in just a few short scenes than she did in her Oscar-nominated lead role in The Help.

Extremely Loud and Incredibly Close is a fantastic story about loss that, unfortunately, was not translated well onto the screen, making it one of the worst Best Picture nominees of the year and Daldry’s most disappointing film to date.