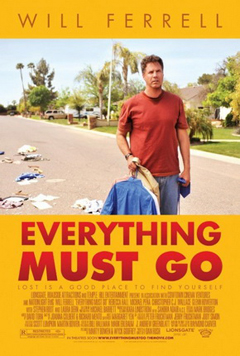 Will Ferrell has another go at a dramatic role in Everything Must Go, a dramedy that premiered during the 2010 Toronto International Film Festival.

Everything Must Go stars Ferrell as Nick Halsey, a struggling alcoholic who has just lost his job and his wife abandons him, dropping all of his possesions in his front lawn — all of this happening in a single day. And if that wasn’t painful enough for Nick, his credit card is blocked, his car’s been repossessed and he is forced to settle down in his front yard because his house is locked and he can’t get inside.

Despite struggling with alcoholism and his life being close to rock bottom, Nick tries to move on with his life and hosts a yard sale to get rid of most of his belongings.

It’s not a lonely journey for Nick during the film. A black kid named Kenny (Wallace, son of Notorious B.I.G.) helps him with his yard sale while trying to learn how to play baseball. He befriends his neighbor Samantha (Hall) and also receives help from AA detective Frank (Peña).

Adapted from a Raymond Carver short story (Why Don’t You Dance), Everything Must Go tells a pretty sad story. While most people may think that alcoholic people are dicks in general, Nick isn’t really a bad guy. He has a good heart, but a big problem to overcome. His high school friend (Dern) gives him strength to renew his life and avoid the dark place he’s been in.

Will Ferrell isn’t a stranger to dramatic roles — he handled Stranger Than Fiction very well. In Everything Must Go, he carried the film very well, doesn’t go over the top with the alcohol problems and he alternates very well between moments of bitter humor, depression, anger and helplessness. He also has pretty good chemistry with Rebecca Hall and Christopher Jordan Wallace, who are easily the best among the supporting cast.

The film could have been great, but it suffers from feeling stretched out. I wish they could have cut out at least 10-15 minutes to avoid the dragging parts. Not to mention, there is a very important confrontation between Nick and Frank that wasn’t well executed thanks to the script. Dan Rush’s lack of experience explains the stretched feeling. This is the first time he is involved in a film in which he takes the roles of director and screenwriter at the same time. I’m sure he could improve later on, but this film is a nice start for him.

In the end, Everything Must Go is a good film that boasts a great performance from Will Ferrell and proves that he, and other comedy actors similar to him, can actually work well in dramatic films and should try it more often.