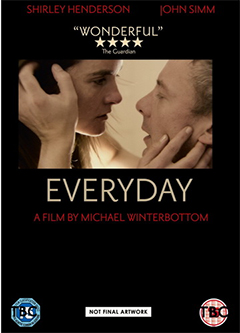 Everyday focuses on the day to day life of a man who was imprisoned for drug smuggling (Simm), his wife (Henderson), and their four children. Their relationship through his incarceration and after his release is a lengthy struggle that the audience is shown only in glimpses, a few weeks at a time without any specifics in date.

The progression of time shown through the film is incredible. The decision to shoot the film over five years, just as the audience watches the family age and change over five years, was genius. It’s clearly a time-consuming matter that many films can’t afford, but in this situation, it worked wonders. As real life siblings, these kids grow up together and it makes the relationships between them and their parents feel all the more realistic.

The constant use of realistic sound throughout is hindered by the recurring pieces of music every time a day ends. The music, usually accompanied by nature shots and the title Everyday superimposed on a black screen, serves to reinforce the idea of time passing by. There are some really sweet moments between parent and child and husband and wife during these segments and out of them, but these beautiful moments are few in number.

Winterbottom uses a very close-knit style of documentary filmmaking for this feature, making it as intimate as possible. Alas, there isn’t much of a story weaved together and the idea of condensing five years of life into an hour and a half is inconvenient. This concept doesn’t give the narrative much room to breathe and it doesn’t leave one particularly invested or even all that interested in these characters.

Henderson and Simm are great as usual in their roles, but the monotonous tone of the film — a clear reference to the repetitive nature of these characters’ lives — works against their solid performances. If Winterbottom’s only goal was to emphasize the distance between this man and his family, then Everyday is a success in that it keeps its audience at a distance and leaves one bored more often that not.