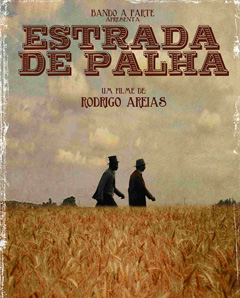 Hay Road is a Portuguese drama with Western semblance and a political message. Set in the beginning of the 20th century when the monarchy was about to give its place to the republic, it was inspired by David Henry Thoreau’s writings concerning the justice and moral of the State. In it, Alberto Carneiro (Correia) is a shepherd who isolated himself in the mountains for ten years, when he receives a letter informing him that bandits had killed his brother. Thus, Alberto decides to return to his village to make justice by his own hands.

After attending the funeral, he bumps into Noémia (Moitas), his brother’s wife. They seemed to have a strange level of intimacy, with Alberto promising to come back to fetch her along with his nephew, after accomplishing his mission. Noémia tells him that she now lives with her patron, a man who doesn’t get along with Alberto.

Following his instinct, he leaves in search for his brother’s murderers, but captain Bacelo (Melo) blocks the road, demanding a fee for the State, which Alberto refuses to pay. A duel is inevitable. In his journey, many men will cross his path.

Throughout the story in Estrada de Palha, everything is depicted in a slow pace, at the sound of melancholic guitars and with beautiful landscapes in the background. Despite its noble intentions and glaring photography, Hay Road wasn’t able to express its ideas in the best way. Trying to adopt a mood that gets close to some of Jim Jarmusch’s works, the film often stumbles in prolonged scenes with lack of intensity. One of the most glaring examples was the dueling scene, which was the only one showing some real action, and even then, the characters didn’t seem to put much intensity in it. Its disconnection seemed to gain even more strength with the philosophical sentences by Thoreau, constantly interrupting the (little) action on the screen.

The philosophy behind the plot showed potential, but ultimately got impaired by a flabby execution, evincing difficulties in setting the appropriate mood and pace.