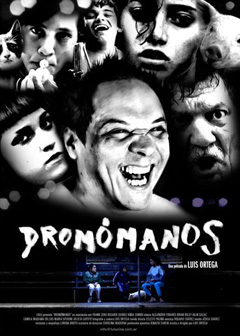 The film begins with a dark scene, no one is able to recognize that we’re in the centre of Buenos Aires — the hidden side of the showy city where there are roamers from shanty towns who are searching through trash bins for a living.

Dromómanos is a story about people who have a mental or physical disability called Dromomanía, an uncontrollable psychological urge to wander. However, those affected by it also have as normal a life as one can have, with problems such as matrimonial quarrels, jealousy, and sadness of life. We don’t know why they live the way they do. Is it because they failed in their roles as members of society, or were their lives originally like this? Or maybe it’s simply their fate to collect parts of a life someone else has thrown out?

Throughout the film, these people face loneliness and suffering from the true nature of being oneself in every single moment, which citizens can not easily see because they live for something else like work, their own achievements, money, etc.

Their struggle continues, even when they try to keep something — someone or some emotions — it always goes away. Nothing stays for them, they always feel the emptiness, so it is always hard to endure the present. This is why they end up getting involved with a false religion, set up to solve their problems, but nothing really changes. That is the destiny of a human being. We have to stand it until we die. The morbid obsession to escape the solitude brings an irresistible wonder, an instinctive impulse and delusion.

However, we can’t say the roamers are lazy, slow of understanding or that they have just abandoned their lives. Dromómanos shows the intensity of their struggle to stand their present. It represents how life is for people living with fundamental questions without “normal” socialization. It’s not a philosophical agony, but an over-consideration of instinct from existence as a human.

Therefore, director Luis Ortega asks us how we can judge and treat their lives as morbid, impulsive or irritating? The last scene contains a direct message for re-understanding, which I didn’t like, but what Ortega presents to us has a wonderful absorbing power with a realistic portrait of filmmaking.