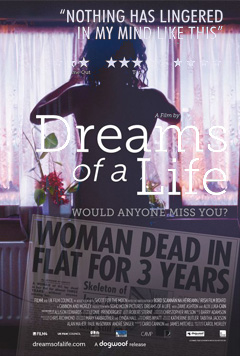 “Everyone has their secrets, she just had more than most,” Martin revealed of his ex-girlfriend, Joyce Carole Vincent. Her badly decomposed remains were discovered in her council flat in Wood Green, North London in 2004. Her body had been there for three years lying amongst Christmas presents, the TV and heating still on. Nobody noticed. Nobody reported her delinquent bills to the police. Neither her family, friends nor neighbors thought to check in on her, even when the smell next door became suspicious and overwhelming.

When the story broke in the newspapers, reporters didn’t even have a photo to put a face to a name. Reading a story like this, one might picture a drug addict, a drifter, or someone living on the edge of society. But Joyce Vincent was only 38 years old when she died and lived an active social life. How did someone seemingly so intelligent and successful not only slip through the cracks, but fall off the map completely?

Director Carol Morley took on a difficult task in trying to reconstruct Joyce Vincent for her documentary Dreams of a Life. Intrigued by the harrowing story in the papers, Morley set out to find any information she could about Joyce’s life — ads went up on the web, in newspapers and on the sides of black cabs.

One by one, Joyce’s acquaintances came forward, each and every one of them palpably shocked to learn that the Joyce found dead and alone in her flat was the same girl they used to know. She was beautiful, happy, and popular, they said. She had a job in London’s financial district, appeared well educated, and often went out with friends. But as the interviews continued, they realized they didn’t really know Joyce—not the real Joyce, anyway.

Morley’s research revealed a woman whose appearance masked a secret life, and this revelation is both the most interesting angle of the film and its biggest problem. Joyce frequently changed jobs, cut herself off from her family and friends, and cited her bank manager as her next of kin on a hospital admissions slip, despite her father and two sisters still living. “She was a chameleon,” another former boyfriend said. She molded herself to other people, lived more like a vagabond than someone with their feet firmly on the ground. When she stopped communicating, everyone figured she’d gone traveling or simply moved on with her life. Joyce was a woman who wanted to disappear.

Cinematically, not enough factual ephemera (photos, home movies) exists to pull off a Ken Burns effect, so Morley relies on actors to bring Joyce (Ashton) and her acquaintances to life. These re-enacted segments are interspersed with interviews wherein Joyce’s friends become talking heads. Although not an uncommon method of documentary filmmaking, it does give Dreams of a Life an unavoidable Made-for-TV docudrama flare.

The film is particularly effective as a social commentary, uncomfortably reminding us how easy it is to fall out of touch with our nearest and dearest despite living in an era when people’s personal details can easily be found with a Google search. In the film’s final scene, newsreel footage of a Nelson Mandela rally in London—the only piece of documentary footage used–plays on the screen. Zooming in on a small group of people, a young woman turns toward the camera. This is Joyce Vincent—the real Joyce Vincent—or, rather, the Joyce Vincent all her friends knew.

Morley intends to pack a punch by saving this bit of footage for the very end of the film. But while it’s certainly jarring, it only shows the invented Joyce Vincent, rather then the Joyce Vincent Morley set out to uncover with this documentary.

Morley put in a solid effort in telling this compelling story, but Dreams of a Life is just that: a largely imagined rendering of a person who pretended to be someone else. In the end, the real Joyce Vincent, unfortunately, still remains a mystery.