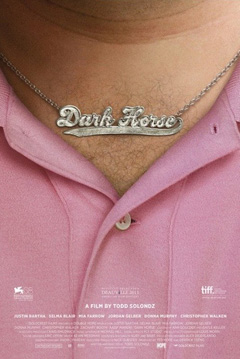 Todd Solondz’s type of storytelling is an acquired taste. I’ve never actually ventured beyond his mad successful Welcome to the Dollhouse — with a cult star-making role for Heather Matarazzo — and Happiness, but even a Solondz newbie like me could appreciate movies like those.

Though painted as a dark comedy that starts with a deadpan awkward intro at a wedding, Dark Horse is a bizarre drama following the life of Abe (Gelber), a nearly forty-year-old man still living at home with mom and dad (Farrow and Walken), and reluctantly working for his father’s company.

Despite his sour way of looking at things — including his bitter relationship with his younger brother Richard (Bartha) — Abe still is under the delusion that he can get together with messed-up-soul Miranda (Blair), who will be averse to accept his advances… at first.

Solondz’s stories aren’t unfamiliar with underdog characters, but I never perceived any of them as unlikable as Abe was. It wasn’t an issue that he was unsuccessful, that he still lived with his parents, that he was thinking of marrying and keeping his parents’ house while sending them to a home. I didn’t even mind that everything was somehow wrong and that it wasn’t his fault but everyone else’s. No, he also had to be ungrateful.

The last act of the film is a hepatitis mess that really comes from nowhere, but what does the last shot of Marie at the office mean? Did everything that had just happened actually happen?

Is Donna Murphy actually the lead of this story? Maybe Dark Horse is worth watching a second time, despite the liver-busting feelings I got from watching it.

Dark Horse will be opening at Landmark theaters in San Francisco and East Bay on July 20th.