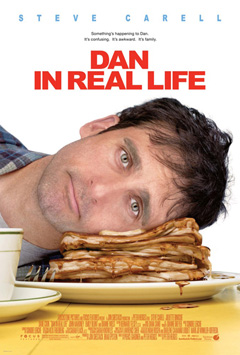 I don’t know what it is about Dan in Real Life. Whenever it’s on TV, I can’t help but to watch it. I think I’ve watched it over ten times on a broad variety of channels, and I just keep going at it.

The film is probably the only Steve Carell film that I’ve watched multiple times, and I think it might be my favorite film role of his — though Crazy, Stupid, Love could give this a run for its money… but then again, Juliette Binoche makes everyone look good, right? Whatever the situation, whatever the dialogue, whoever the co-star. [1]

Dan in Real Life is the story of Dan (Carell), widowed father of three girls — seventeen-year-old Jane (Pill), typical teen Cara (Robertson) and his baby girl Lilly (Lawston). He’s got your average life problems: his eldest daughter wants to drive but he doesn’t let her, Cara wants to hang out with her new boyfriend, and Lilly just wants her father’s attention.

On their traditional family weekend Dan gets together with the rest of his family — mom, dad, siblings, siblings-in-law and all. He runs into Marie (Binoche) at the local bookstore where they have a lovely time together. Back at home, thinking he’s found his other “one”, Dan tells his family, including his brother Mitch (Cook), that he’s met someone amazing.

Mitch, of course, is thrilled because he’s bringing his new girlfriend home, who turns out to be Marie.

Dan in Real Life is predictable, but it is in that predictability where we’re able to focus on how good Carell and Binoche are together. I wouldn’t have ever imagined it. I don’t think any movie snobs would actually picture their beloved La Binoche as a counterpart to the goofy Carell, just like mainstream audiences wouldn’t put their funny guy with that French actress that did Chocolat.

Their chemistry is impeccable, especially when they’re at home and can do nothing about it. Marie plays it like the cool zen woman that she is, which drives Dan nuts until Ruthie (Blunt) comes into play and things turn around. Of course, everyone else on the film is underused — Dianne Wiest and Amy Ryan are background characters, but all play their parts. They all make the family work, even Dane Cook — whom I hate.

To be honest, in every single film he’s done he’s the most obnoxious character ever and I hated him here. The first time I watched Dan in Real Life, I really thought that he was the only thing bringing the film down. Truth is, as much as I hate him, if Dane Cook hadn’t played Mitch, we wouldn’t have been as willingly supportive of a Dan/Marie relationship. How many of us would find ourselves in the position of “stealing” the boyfriend/girlfriend of someone close to us, as Dan’s brother would be. After all, family comes first, right?

I have two favorite scenes in the film: first, the scene in the shower — ridiculously funny with Binoche giggling. Second is the pancakes scene. Nothing says “I love you so much, but I’m so jealous I want to kill you” like burnt pancakes.