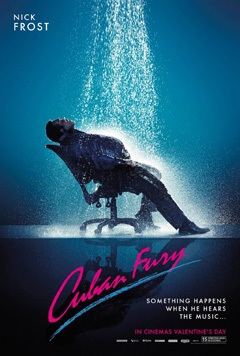 I’m not one for minority quotas, so I didn’t lose any sleep thinking whether latinos would be cast in this Brit production, because I can’t think of a sigle British production that had any relevant latinos at the top of my head. But this Flashdance poster made me a bit giddy on the funny possibilities for Cuban Fury, which was to follow the life of an ex-Salsa dancing champion (Frost) who takes it up again to impress his new sexy American boss (Jones), who is into Salsa as well.

Sadly, the movie wasn’t funny- there may have been a juvenile laugh here and there with Chris O’Dowd for some people, but I found him insufferable. And though I don’t hold anything against Rashida Jones, I didn’t feel her character added anything extra to either the story or to the jokes, her character could have been played by anyone and it wouldn’t have made a difference. I do have a question, do European mainstream (male) audiences have a thing for American women just like American audiences have a thing for minority women?

Frost’s best scenes came with Olivia Colman who played his sister, ex-salsa partner and motivational speaker, as well as his tough love relationship with his ex-coach Ron Parfitt (McShane). Though cookies shall be given away for the inclusion of Tito Puente (R.I.P) and Willie Colon in the soundtrack, instead of remixed modernized dance club versions that would be good iTunes business, I had a pet peeve whenever they referred to “El Corazón” (the heart) in their dancing. I know that besides the Americas (the US or Canada), everyone else tends to learn Castilian or Spaniard-accented Spanish, but why would a salsa-lover Cuba-enthusiast like Ron Parfitt refer to El Corazón with such a heavy Spaniard accent. McShane really worked on emphasizing that ‘Z’ sound for unnecessary dramatic purposes.

My favorite mind-bend choice in this was Kayvan Novak, the Persian salsa lover. It totally threw me off, because -as per Hollywood casting- I was expecting a latino, and though I wasn’t much into the over-the-top loudness of his character, it did give a certain freshness to the project. Even though Cuban Fury could work as a story of someone who finds themselves after being shamed and bullied out of what they love to do, it never becomes enjoyable nor engaging enough to salsa its way into our hearts.