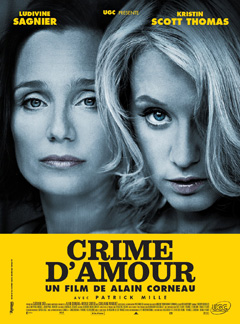 There’s really nothing better than when Hollywood namedrops a foreign film they’re remaking, so really- thanks Brian De Palma, I guess? Crime d’Amour and Passion couldn’t be more different to each other if they wanted.

Crime d’Amour follows the life of Isabelle Guérin (Sagnier), who seems to be anyone’s ideal assistant — she has a mild obsession with order, and you can see it perfectly displayed when we see her home after a late night working session with her boss Christine (Scott Thomas), who seems a little bit too into Isabelle and constantly drops compliments to her youthful and capable assistant.

While Isabelle spends her night working on the client’s brief, Christine gets her way when she wants it however she wants it. She’s the dominant at work and in her relationship with the sketchy Philippe (Mille), who is not the only one she’s sleeping with. On the day Christine is set to fly to Cairo for the job’s presentation, she decides to send Isabelle instead, who nails the account and is eager for more success… but that’s until Christine begins taking advantage of her work, and all sorts of “mean girl” things begin happening.

Crime d’Amour is conventional — a full on melodramatic drama where you have to enjoy the strong presence of Kristin Scott Thomas as a mean b!tch. There’s no other way to put it. She’s a mean b!tch. The first half of the film seems like a run of the mill drama that might really irk you with some of the “advertising talk” they decided to use. The business transactions and office talk is almost pitiful, however, acting from Scott Thomas and Sagnier almost makes it bearable enough to make you reach half the film and things begin turning as Sagnier’s character begins losing her composure. From that point on, Crime d’Amour becomes a procedural drama from the point of view of the culprit, and makes Sagnier’s character’s OCD shine.

There isn’t really much else to praise in the film because it usually lacks ambiance and the pace seems to devoid the film of any atmosphere for a thriller (that it is not) — surprisingly, though, with those elements (which De Palma’s version supposedly has), the story and development doesn’t get any better.

If you’re really gonna praise Crime d’Amour, it’d better be for its leads performances. Sagnier proves to be a great on-screen presence after Scott Thomas’ Christine stops overbearing with her presence, so they both balanced each other out. Great lead casting, and the final scene is a cherry on top of a pretty nice vanilla ice cream.

Extra half a star for the Sagnier and Thomas.