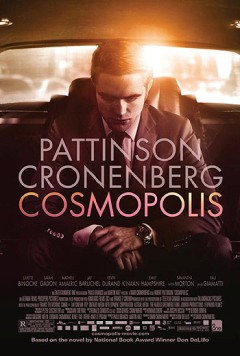 The first teaser trailer for Cosmopolis [1] made the film look really exciting to watch and worth anticipating. However, I must say that the premise and execution of David Cronenberg’s film, which is based on the novel of the same name by Don DeLillo, is a very mixed bag.

Cosmopolis is pretty much a slow ride (literally) as we follow young billionaire Eric Packer (Pattinson), who does most of his daily activities inside his high-tech limousine. What started off as a ride to get a mere haircut ends up turning into a slow yet bizarre ride (and day) thanks to the President’s appearance causing a very heavy traffic jam along with anti-capitalism (and rat-wielding) protesters wrecking havoc across the city.

During his lengthy limo ride, Eric deals with multiple encounters and conversations with various characters that appear into his life. From sex encounters with many women, meetings, death threats, social commentary, the financial world and more, Cosmopolis showcases a never-ending barrage of dialogue as Eric’s life takes a turn for the worse as time passes by.

Elise: I was never good at geography and I learned things by asking the drivers where they come from.
Eric: They come from horror and despair.

Let me say this right off the bat: Cosmopolis isn’t for everyone, especially not for those Twilight fangirls interested in checking this out just because Robert Pattinson stars in it. It’s a bizarre, dialogue-heavy film with great camerawork that makes you feel like you’re watching a stage play. The biggest problem with Cosmopolis is the adaptation of the source material itself. The film is filled with good quotes, interesting social/economic commentary and even some good use of dark humor — most notably the scenes in which Eric cries over the death of a rapper (K’naan), when he has his prostate exam inside his limo in front of a woman (Hampshire), or when he rambles with a friend (Nozuka) about using rats as a new form of currency. That’s really funny when you think about it.

Unfortunately, all the good things present in Cosmopolis are negatively outweighed by its screenplay. Amidst the dystopian setting, everything said by the characters doesn’t amount to much by the time it’s over. Even worse, the slow pacing, along with a good chunk of the lines delivered in such a boring fashion, makes Cosmopolis extremely frustrating to watch.

As far as Pattinson is concerned, he fit well as the young billionaire who looks cold, empty, and disconnected with the world. This may be his best role to date, but that’s not saying much. However, Paul Giamatti as Benno, a former employee of Eric who is out to kill him, steals the show near the end of the film. The way Giamatti rambles about how Benno can’t function in society with real emotion and pain is truly outstanding, it manages to provide sense in the film and ends Cosmopolis on a strong note.

What a shame that the film wasn’t on the same level as its ending.