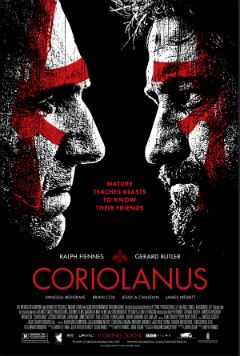 I am a Shakespeare nerd (comes with being a literature major) and I adore almost all of his plays. Coriolanus is not one of my favourites and this movie adaption by Ralph Fiennes didn’t help that much. I won’t say that the movie was a total disaster, but it is a hard movie to like if you aren’t familiar with the Shakespearean way of speaking.

Coriolanus is the classic tale of the general that was banned from the city he shed blood for. In Rome, the people are hungry. Riots are organised, the protests are loud.  The citizens are tired after several wars with the Volscians; they are hungry because there’s a shortage of grain. All they want is peace. Coriolanus (Fiennes) is both loved and hated — loved as the magnificent general that he is and hated merely out of jealousy. That jealousy leads to a scheme that eventually makes Coriolanus show his real colors and he is banned from Rome as a traitor. Bitter and resentful,  he seeks his enemy Aufidius (Butler) and asks for his aid to revenge the city that so hatefully turned its back on him.

So far, we have the traditional Shakespearean tragedy — the hero that is lured and therefore cast away. There is jealousy, revenge and loads of bloodshed.

When it comes to contemporary spins of Shakespeare… well, they aren’t always easy to execute. You either keep the premises and retell a classic story, or you adapt it to the current time with no changes to the original dialogue, or you do a modern adaption of it, keeping the core plot. Some have been very successful with all three examples (Romeo & Juliet), but oh so many have crashed and burned. With this adaption of Coriolanus, to me it’s stuck pretty much in the middle. It has some good qualities — such as some of the cast, the scenery and the photography. But then the dialogue becomes a bit too burdensome, the pace of the plot is a bit slow.

I feel that Fiennes wanted too much with the movie (not so surprising seeing as this marks his directorial debut) and it all became too much in the end. The close-ups were so dramatic, the lighting as well, the dialogue was accompanied with much spit. I feel Fiennes went a bit overboard with trying to make the movie perfect. In some parts I felt he was over-acting, then he reminded me of Voldemort and then he was pretty much amazing. I am a bit confused with the casting of Butler. He was misplaced in this project — the acting wasn’t the best and he was just weak all around. Vanessa Redgrave was working the camera as you would do a theatre stage, she was magnificent. Albeit in a small role, Jessica Chastain was a great contrast to the  hardness that is Coriolanus. She was soft and bright.

In conclusion, this movie was a disappointment. I guess I was putting much hope in Fiennes, both as an actor and director. I wouldn’t recommend this movie, but I think I might watch it again. But that is just the Shakespeare-nerd in me.