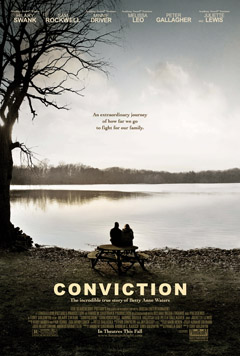 Conviction tells the true story of Kenny Waters (Rockwell), a man wrongfully convicted for the murder of a woman. With the help of his sister Betty Anne (Swank), who gives up almost everything in her life to get into law school to become a lawyer, he endures over 15 years in prison.

There is nothing inherently wrong with a movie like Conviction, disregarding what your views are on the death penalty, or if you watch too much CSI. There’s nothing wrong with the acting, but the film falls short in script and editing… but then again, there’s only so much you could do to a script telling a true story. If it were more exciting, we’d be complaining it’s sensationalizing it.

There’s a point in the film, however, in which we begin thinking about the length of the film. We just want it to end. We know what the outcome will be, and we ended up caring little about the characters… considering every time Betty Anne made some progress, Kenny lost himself in a euphoric act that gets him into more trouble.

Also, the movie failed to update us on Kenny by the end of the film, informing us that he passed away just six months after his release… dying a free man.