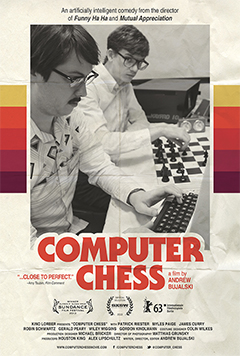 From the second it starts, Computer Chess feels like a cheap VHS tape taken from a back room somewhere. The gold one can find on those old tapes is endless, but Andrew Bujalski’s latest film, shot on a 1968 Sony AVC-3260 tube video camera, is truly on another level.

For such a seemingly low-budget film, Bujalski’s work here is incredibly ambitious. It kicks off as an almost innocuous documentary-like exploration of a computer chess tournament, with nerds spewing out Primer style techno-jargon at times and a lone female offering up some amusing bits of interaction. The comedy comes across so organically, finding humor in the way these humans interact with each other and the technology around them. This isn’t to say the script doesn’t pull for laughs as well, constantly delivering one-liners like, “I do not think that Tesla is a good role model for your academic career.”

This mislead is exactly what makes the rest of the film, a nightmare whose giddy surrealism is on par with that of Lynch or Maddin, so goddamn fascinating. Computer Chess dives into the depths of existential comedy, prompting conversations about the difference between humanity and artificial intelligence that are sometimes hilarious and other times horrifying.

The horrifying comes in small bursts, leaving one wanting to question what the hell is actually going on more often than expected, but it’s an endearing quality. There are moments so absolutely baffling in their placement that they make the film feel fresh and fun, even if it looks as retro as physically possible. The first of these comes at the moment when the computer chess crew finds what can only be described as Twin Peaks‘ resident couples counselor, but it’s far from the strangest encounter.

Andrew Bujalski and Matthias Grunsky go a long way towards making Computer Chess a memorable black and white work, using what a friend of mine called “in-camera psychedelia” in the most fascinating way. Grunsky’s cinematography and Bujalski’s editing really maximize this unsettling feeling, constantly cutting these dreamlike scenes in almost undecipherable ways that enhance the surreal style.

One of the film’s best atmospheric enhancers comes in the form of Collie Ryan, a seventies musician whose obscure music adds a soothing human quality to Computer Chess that no synth-based score could ever hope to achieve. Of all the music used in the film, some of which goes hand in hand with the eerier scenes, none is quite as effective as her songs from the seventies.

So much of Bujalski’s writing involves bringing humanity and artificial intelligence together as one. It’s the moments when one thinks it can’t physically get any more existential that surprise the most, leading to inanimate objects becoming sentient, questioning their existence and whether or not they have souls. It begs the question, “Just what is artificial intelligence?”

Of all the characters, Patrick Riester’s Peter and Myles Paige’s Papageorge take the cake at diving into the film’s purposely Lynchian situations. Peter’s experiences with a spiritually enlightened and sexually free couple pushes the cringe-worthy side of things, while Papageorge’s late night strolls handle the comedic portions. Nothing is quite as brilliant as when the B&W photography is ditched for the sole purpose of literally throwing Papageorge into a horrifyingly hilarious feedback loop. There’s color, the sound is completely off, and it all feels incredibly broken. And right there – after the yells of confusion and excitement – that’s where the point of the movie hits home. It’s all about being broken.

If Computer Chess has one thing to say about humanity, it’s that we’re all playing a game. Just as a computer program malfunctions, a human being can break just as easily. Proving itself as a smart and layered work that practically begs for a rewatch, Andrew Bujalski’s film will more than likely leave you lost in a loop for days.