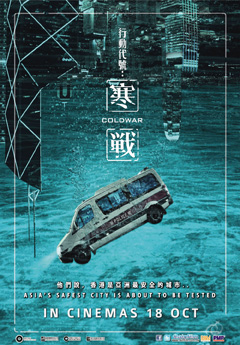 Here comes the latest hit from the Hong Kong movie-making machine ousting Skyfall from the top spot with a few million dollars (or a hundred and a bit more million Hong Kong dollars) of box office in the Hong Kong/Macau/China territories in only five days [1][2][3], revitalizing the police genre, which had made Hong Kong famous with hits like Infernal Affairs.

Though, I must admit, I felt a bit dense at the beginning of the film because things seemed to be moving too fast and I just couldn’t get a handle on how the Hong Kong police hierarchy worked, Cold War begins with a boom — literally — when one of the city’s hot spots gets bombed and a police van (alongside five officers) get taken away, held hostage and in-waiting for a handsome ransom. With the commissioner’s post up for grabs, there are two very different people with two very different methods to solve this crisis- first, Deputy Commissioner Lau (Kwok), who wants to negotiate with the hijackers while tracking them down with the ransom money, and Deputy Commissioner Lee (Leung), who wants to go all out on an aggressive attack to retrieve his people. The name of the mission: Cold War.

Dirty cops, corruption, ambition and a power struggle adorn Cold War to make it one of the most entertaining of Hong Kong films, which had been highlighted lately with dramas like A Simple Life or with added flavors of romance in Love in a Puff (and its subsequent follow-up, Love in a Buff), or off-beat surprise hits like… eh, Vulgaria. Cold War adds a much needed boost to the commercial side with a familiar, yet refreshing, police bureau story. Cops are popular (at least in fiction, cough). Though television seems to be invaded by procedural crime stories where the whodunnit and how seem to be a lot more important, this movie takes away the procedures to focus on the goings-on. What happens when the “safest city in Asia’s” seconds are numbered?

Editing is quick and sometimes made it hard to follow, even for people used to watching subtitles, but the pace helps to build the tension since we are really running out of time. Aaron Kwok seems to be more at ease in this role than he was in the heavy-handed Floating City, but it is Tony Leung Ka-fai who looks unrecognizable in his nearly antagonistic role, especially in his later scene with Eddie Peng. It was also nice to see Charlie Yeung (also from Floating City) standing her own in the cool boys club that is the police story business.

Overall, very recommended watch if you get the chance at the theater… or quite the blind buy if you have to wait for a home release to enjoy this. It’s a guaranteed thrill ride. Also… is Hong Kong really the safest city in Asia?