Children Who Chase Lost Voices from Deep Below 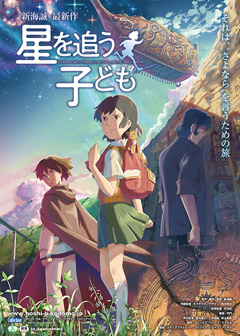 I have to admit, that’s one chunky English title, though both titles have something to do with what the movie is about. Children Who Chase Lost Voices from Deep Below has all the metaphysical connotations needed to bring a certain crowd in.

I’m really not familiar with any of Makoto Shinkai’s work, though, apparently, all his films — Voices of a Distant Star, The Placed Promised in our Early Days, and 5 Centimeters per Second — deal with the loss of someone dear to our protagonist.

In the case of Children, it’s not only about Asuna’s (Kanemoto) loss of mystery boy, Shun (Irino). It’s also about her father who passed away when she was still a small child and the loss of a certain Mr. Morisaki (Inoue).

Asuna is the representation of a prim and proper girl. Since the passing of her father, her mother works even harder as a nurse, thus Asuna has to be quite independent — cooking, cleaning, feeding mystery cat, Mimi, and still getting the best grades in her class. Asuna finds the time to get away and disappear into the wilderness, where she’s able to listen to a curious wavelength on her home-made radio, when a sudden encounter with a bizarre monster/animal introduces her to Shun.

Writing a synopsis for Children is hard to do without giving too much away, but the focus of the film is exploring what happens after you lose someone. It moves on to the after-life and presents us with the concept of Agartha [1], which, according to legend, is a city deep in the middle of the Earth — very much like an in-between place between the living and the dead.

The film is beautiful — especially in high definition — and you can see loads of inspiration from films like Ghibli’s Nausicca or Princess Mononoke. There were even times when I thought one of the characters looked a lot like Ashitaka. Though, there was something about the horse animation that felt weird.

Surprisingly, there’s quite a bit of violence in the film. It isn’t to the extent of Mononoke, but there’s blood and the story deals with aspects of war — there’s mention of Napoleon and even Hitler. I also noticed that it dealt with Xenophobia, and this is what I thought was genius about the film — there aren’t actually any bad people. When we think someone is the victim, there’s a turn around and the roles are switched.

The problem with Children Who Chase Lost Voices from Deep Below is that it explores so much — the philosophical life/death aspect, anti-war, pro-nature, pro-balance. These aspects make the film great, but they also make it difficult to connect with the characters. I felt like I needed to be moved,  but I just wasn’t attached to the characters.

I wanted to know more about the world, though. I wonder if they’re planning on keeping a serial manga of Children Who Chase Lost Voices, or if it was just to promote the film.