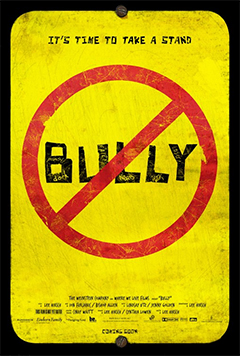 Bullying is a disturbing issue that affects people of all ages, and often those who suffer the most are left in silence. In comes the Weinstein Company, on the highest of horses, to bring the world a documentary that declares “it’s time to take a stand” as its tagline. Unfortunately, Bully does not even come close to offering a realistic look at bullying in the U.S.

Bully shows how different students and families from around America have been affected by bullying. The main focus is a 12-year-old boy named Alex from Iowa. He suffers regularly from teasing and even physical violence from other students. Ja’Meya is a young girl who was sent to juvenile hall after being tormented so much that she had to resort to bringing a gun aboard her school bus. Another young girl, Kelby, has been ostracized by her community after coming out as lesbian and is attempting to deal with it through the support of her friends and family. Also featured are stories of parents who have lost children due to suicide and who have launched the organization Stand for the Silent, dedicated to preventing school bullying and youth suicide.

The film’s biggest issue is that every story that doesn’t relate to Alex is left to die after being established. Both Ja’Meya and Kelby’s stories have key issues other than bullying that are important for today’s generation: gun violence, race and sexuality. It is disappointing that a film like this allows these two stories to dissolve into a series of landscape shots and a lot of walking around with friends and families where nobody speaks. The touchy, but equally important, subject of suicide is handled slightly better, but barely touches anything that would indicate why these kids would take their lives aside from the big bad word “bullying.” While some of these stories are genuinely sad, the film relies on getting as many people to cry on screen as often as possible, allowing for the emotional manipulation of audiences everywhere.

As if the unevenness of the film wasn’t bad enough, some of the camera work makes one wonder how anyone ever let Lee Hirsch work on this. There are ten too many landscape shots, as well as shots of teens staring off into the distance, and the number of times that the camera purposely goes out of focus for no reason is obnoxiously distracting. Many of the bullying incidents with Alex on his bus route feel staged, and the use of archival footage from the bus, as with Ja’Meya’s incident, would have worked better.

Bully feels like multiple after-school specials. There’s one about bullying with reenactments that will not admit to being staged, one about youth suicide, and one about how flawed the school administration is. If you poorly edit together those three with a BBC nature documentary and try to limit yourself to under 100 minutes, Bully would be your result.

*Originally published in the Beacon newspaper