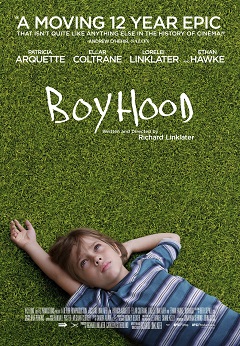 By now, I think everyone has heard of Richard Linklater’s Boyhood because of its unique filmmaking approach, which is highly interesting in theory. Even better, the execution of watching a boy (and his family) grow over 12 years — which mirrors and surpasses Linklater’s Before trilogy in terms of watching actors age on screen — is simply a masterful and marvelous achievement to watch.

As Boyhood‘s opening minutes kicks off with the film’s title in the sky and Coldplay’s Yellow [MV] blasts off, we are introduced to 6-year old Mason Evans Jr. (Coltrane) laying in the grass and looking at the cloudy sky. For over 12 years, we get to see him mostly living with his mom Olivia (Arquette) and his sister Samantha (L. Linklater) as well as seeing the kids’ father, Mason (Hawke), visiting them from time to time. At the same time, we also get to see how everyone changes and evolve with time through several life events, which includes moving to other locations, divorces, forming and breaking friendships and relationships, strenghting family bonds and more that it’s hard to precisely describe in few words other than saying Boyhood is almost “life itself” for a dysfunctional USA family.

Though we have recently seen children growing over the years in the entertainment industry through the Harry Potter film series — this franchise in particular gets some good advertising, but it’s done in natural fashion along with its other pop culture references unlike most advertising spotfests in other films — or via television with Sally Draper in Mad Men or reality television and several telenovelas/soap operas, Boyhood is a different kind of beast considering its passage of time is condensed into only 170 minutes and the pacing is extremely consistent and strong. I must say that the title is misleading because Boyhood isn’t just only about Mason growing up on screen: brotherhood, sisterhood, motherhood and fatherhood are always present, but in different doses. Mason Jr. goes through several life changes that comes with aging, while Olivia had to adapt to survive with her family and father Mason got revamped over the years while still being the “cool dad”. On the other hand, Samantha was sort of matched with Mason Jr. in screentime terms until she gets older (she does get development, but it’s mostly off screen) and at that point Boyhood shifts towards Mason because it’s life through his eyes after all.

12 years gimmick aside, Boyhood‘s strongest elements is how fluid the transitions between the scenes (and years) are thanks to its loose structure as well as the family dynamic being really fascinating to watch. All the main characters are relatable to a certain extent (this may vary with your gender and age, just only to cite a few factors) and they are a fine treat to watch, especially Ethan Hawke and Patricia Arquette as the parents.The latter steals the show and her Oscar-worthy performance is simply the strongest of the entire film. Olivia always wanted to make things better for her children and she does her best to adapt for survival in regards to her work, relationships with men and paying the bills on time. But life has many ways of backfiring that for her. The most painful moments involving Olivia takes place around the first hour through her first husband (Marco Perrella), whose rise and fall are striking to watch, as well as the inevitable farewell between her and her kids, especially with her younger son.

Boyhood is a film that can be easily subject to praise for its gimmick, but it’s also prone to criticism in regards to choosing a male kid over a female kid for the “12 years” experiment (not to mention other logisitcal, geographical and life factors, but that’s another story) as well as having one wondering how the project would have been conducted (or concluded) if any of the main parties involved passed away before completing the film. Anyways, Boyhood will easily stand the test of time in film history and it is concrete proof that Richard Linklater’s mind, vision and scope are one of a kind. Even if he has checked on Jesse and Céline every 9 years — will we see them again by 2022? — who could have thought of doing something like Boyhood on film?

I’m still debating on the star rating, though. Life isn’t perfect and Boyhood has its share of questionable things that prevents me from giving it a perfect rating, but Linklater’s film makes him deserving of Best Director and Best Picture nominations.