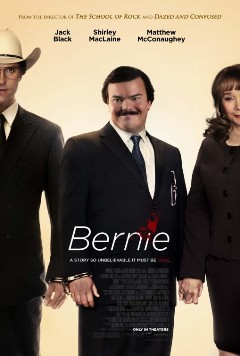 Back in 2002, director Richard Linklater and Jack Black worked together in School of Rock, which led Black to his first ever Golden Globe nomination. Since then, Black has been hit and miss in almost everything he’s involved (unless you count his voice acting as Po on the Kung Fu Panda films). But I have to admit that his reunion with Linklater on Bernie — which landed Black nominations for the Golden Globe and Independent Spirit awards — changes that in a good way, making it a career highlight for him.

The film tells the story of Bernie Tiede (Black), a really good assistant funeral director who quickly became one of the most likeable residents of the tiny rural town of Carthage, Texas. Things change for Bernie when Marjorie Nugent’s husband (J.D. Young) passes away, leading Bernie to establish a relationship with someone who happens to be one of the town’s most unlikable women. Somehow, Bernie and Marjorie (Maclaine) managed to start off an unlikely (yet very friendly) relationship, and let’s leave it at that because I’d be spoiling the film for you.

Yes, you can Google Search “Bernie Tiede” if you want to, but Bernie will be more enjoyable to watch if you don’t know anything about him before giving this film a shot.

Bernie uses the mockumentary format to tell the story as we get to see the townsfolk (actual Carthage citizens) interviewed during this film, and they stand out strongly in a way that makes Bernie feel like it has two stories in one film: there’s the story of the man himself, and there’s also the tale of a community who remembers their beloved funeral director fondly. Bernie also benefits from having great direction and screenwriting thanks to Richard Linklater, who successfully balances the mockumentary format, Bernie’s story and the black comedy elements with good results.

Needless to say, the cast is great. Shirley Maclaine excels as the selfish woman who changes slightly when she meets Bernie, while Matthew McConaughey flawlessly plays as the town’s sheriff  who ends up being the demise of our main protagonist. However, it’s Jack Black who takes the cake for the film’s best act as he does a delicate yet layered performance of a man who is solicitous, gentle, and tactful with just about everyone he knows — almost the total opposite of Black’s usual over-the-top and loud shtick, because Bernie also happens to be a funny, odd and sometimes creepy guy. There’s also a aura of ambiguity surrounding Bernie’s feelings and thoughts — even the townsfolk don’t know much about him — but Black is stellar at not showing everything Bernie has  — but you can sense it — and this works strongly in Bernie‘s favor.

Taking in account its story, black humor, bizarreness and strong performances, Bernie is easily one of the best comedies released during 2012.