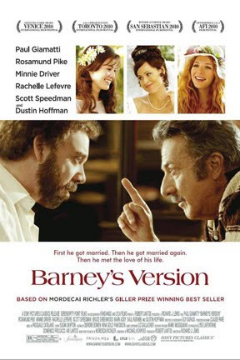 Why am I not an avid fan of Paul Giamatti? It baffles me that I’m not, after watching this. The man is astonishing. I would love to go on how much respect I gained for him after watching this, but I guess I should talk about the movie as well.

Barney’s Version is, as the title points out, the story about Barney Pafnosky (Giamatti). When his best friend Boogie (Speedman) disappears after a fight – Barney becomes the main subject of Boogie’s murder. Years pass and when a book about Boogie’s disappearance surfaces, Barney is forced to remember the actions that lead him to the moment he saw Boogie for the last time. We get to see Barney’s candid confession about his life – a life filled with warmth, friendships, wittiness and a whole lot of failed loves.

Barney is not that much of a hero, if anything he is very much an anti-hero. He smokes cigars, drinks too much and is very self-centered. Yet, you can’t help but feel for him. Paul Gimatti completely made this flawed character loveable. Barney is a bit of a douche but a nice one. The kind of douche you wouldn’t mind having as a friend. We get to follow Barney from his adult years in Italy all the way to his death in Canada, a path which Giamatti beautifully portrays the highs and lows of a man’s life.

But the best thing about this movie was the cast. Hoffman as Giamatti’s dad; an old-school cop that has a lot of wisdom to share with his son. Rosamund Pike playing Miranda, Barney’s third wife; a woman that is so different from Barney, somewhat too good for him, yet perfect for him. Minnie Driver was obnoxious as Barney’s second wife – a somewhat spoiled Jewish princess.

I think it’s been a while since I saw a movie I loved as much as this one. I cried watching this, not that it’s terrible hard to make me cry — I can cry seeing a puppy — but I don’t cry that easy watching movies, unless they make me feel something. I consider a movie to be good depending on how much I cry. I cried buckets watching this.