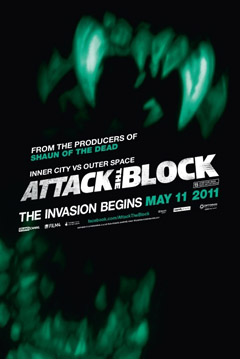 Joe Cornish’s feature film debut, Attack the Block, is a stellar ’80s creature feature that was never made. It exceeds many expectations and does well at bringing back many things that made many of John Carpenter’s films so appealing.

The film opens with a young nurse named Sam (Whittaker) being mugged by Moses (Boyega) and his faithful gang of friends (Drameh, Esmail, Jones, and Howard). Within minutes, the gang attacks and kills an alien after it crash-lands in a car nearby them. After hiding the alien’s body in the house of their drug dealer and friend Ron (Nick Frost), the teens are thrown into a battle with their extraterrestrial enemy, as well as the gangster-rapper Hi-Hatz — a man who previously wanted Moses as his successor and now wants to kill the gang for blaming all their problems on the alien attack that he doesn’t believe is happening. The gang runs into their recent victim Sam again and together, along with the help of many other colorful characters and neighbors, take on the alien attack without any help from the police — who seem to be doing more harm than good.

Boyega and Whittaker should both be given honorable mentions for their acting. They do a great job with their characters, delivering some of the more serious tones to the film. Although Nick Frost will be given much credit for the comedic aspect of the film, all of the supporting cast provides plenty of laughs, especially two of the younger film characters who pop up at the most amusing moments.

There’s no denying that Attack the Block is a quick-paced film with plenty of wit and a lot of heart. Working with a low budget and using as few special effects as possible truly worked well for it, keeping it entertaining and more realistic than most science fiction films these days. The strong use of South London slang is definitely a defining factor of the films authenticity. Of course, this isn’t to say that the film is perfect, as it unfortunately takes a turn for the obvious — drilling its message and social commentary about urban youths in with an ending that doesn’t feel quite right.

Attack the Block doesn’t play out like your average alien invasion. Joe Cornish manages to show us what a bunch of street-savvy teens from South London would actually do in a situation like this: try to beat the living shit out of their enemy or die trying to save their block.