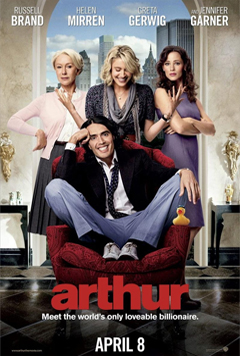 In 1981, a wonderful film by the name of Arthur was released. Starring a fantastic cast featuring Dudley Moore in his Oscar nominated role as Arthur Bach, Liza Minelli as his love interest Linda, and John Gielgud in his Oscar winning supporting role as the loving butler Hobson. Almost thirty years later comes a remake, and although it shares a name and story, the recently released film is quite a bit different than its original.

Arthur Bach (Brand) is a drunken multimillionaire who makes some of the most irrational decisions, the first of which includes imitating Batman and even driving the bat mobile itself. Although he is engaged to a rich and dominating woman named Susan (Garner) through an arrangement made by his mother Vivienne (James), he inadvertently falls in love with the sweet young woman Naomi (Gerwig). Arthur’s nanny Hobson (Mirren) is ready to help him through almost any situation and attempts to control his choices. Soon enough, his mother threatens to cut off his inheritance and he must make a choice between the woman he loves and the money he loves.

Russell Brand isn’t a particularly likable actor when it comes down to it. He’s an extremely amusing secondary character, but when given a main role, he tends to lack in likability factors. What starts off as an attempt at getting cheap laughs, ends up transforming into a romantic comedy with heart and a film about a man who needs to do some growing up. It’s as though this change can be seen through Brand himself, and not just the character Arthur. He’s much more enjoyable and you get a sense that he’s grown up and isn’t as aloof and unlikable as he once was in previous films – and especially amusing while in a giant gummy bear outfit, and in a library full of children.

Helen Mirren, as always, exudes a presence of control and authority, as well as a motherly feel that adds to the close relationship between Hobson and Arthur. It transforms them into a tender pair and drops the reserved role that Gielgud originally played. It also happens to mark the second time (within two years) that a character originally played by John Gielgud is re-written as a woman and cast with Helen Mirren (the first being Prospero and Prospera, in Prospero’s Books and The Tempest). Jennifer Garner plays the dominating and obsessive woman very well and has excellent scenes of interaction with Brand. She also adds the bit of attitude that the original role seemed to need a bit more of which was an enjoyable boost. Her father, played by Nick Nolte, unfortunately didn’t have quite the amusement factor that the original provided, and felt more like dead weight and an unnecessary addition to a fair cast selection.

The shining star is definitely Greta Gerwig, who truly brings out the best of Brand in this movie. The two have a fantastic chemistry from the moment that her character Naomi comes into play, even donning what seems to be the same memorable yellow coat as Liza Minnelli did as Linda in the eighties. Gerwig is a sweet and bubbly young girl who doesn’t take it over the top, and she can entrance the audience with her nice attitude. She’s the kind of actress you just fall in love with, just like the character does, and you’re drawn to the relationship because of this quality. She makes the perfect complement to Brand, and even shares some fairly heartwarming moments with Helen Mirren’s character.

Jason Winer does a decent job jumping from television directing to film, although I personally favor the many episodes of Modern Family he’s worked on. The movie isn’t quite as amusing or inspiring as the original, if we take it as an original idea, it’s a pretty decent one. Arthur isn’t the best comedy out this year, but it’s fun and worth a watch if you enjoy a sweet story with a good amount laughs.