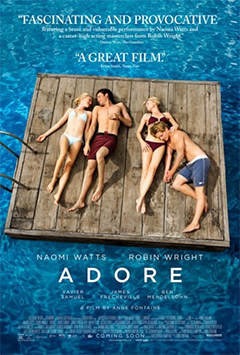 Of all the unconventional relationships around, Doris Lessings’ short novel The Grandmothers is certainly the sort of story that could stir up some discussion. Anne Fontaine’s adaptation, Adore, will be likely to do the same.

Robin Wright and Naomi Watts play Roz and Lil, two close friends who have raised their sons together from birth. While this offers up the chance for them to joke about being lesbians plenty, that’s far from the sexual relationship we’re treated to here. Adore delivers a taboo romance, the one between a mother and her best friend’s son, with Roz and Lil’s son Ian (Samuel) engaging in a torrid affair.

Almost as if doing it out of spite, Lil and Roz’s son Tom (Frecheville) engage in an affair of their own. The couples both seem happy enough, even with tensions rising on occasion, but as time goes by, passions change and relationships fall into turmoil.

However opposed the world might be to a relationship like this one, cowriters Christopher Hampton and Anne Fontaine show just how sincere these characters are. There’s never a reason to push for risque scenes in Adore, simply because the story calls for a depiction of honest, and foolish, romance over scandal.

A couple of scenes and bits of dialogue are a bit cheesy and forced, but it’s all in good fun when it comes to helping along this melodrama with a little too much time on its hands. However realistic the film feels at the start, and even midway, the final act brings it down a bit with some less than believable turns. The story itself moves along at a fair pace though, with Fontaine often giving the characters a moment to reflect on their situations rather than moving onto the next scene without stopping to breathe.

It’s clear that Anne Fontaine and cinematographer Christophe Beaucarne share a fondness for placing the camera on the beautiful bodies of its four central characters. The subtle aging make-up on the women is a nice touch, and the focus on the bodies of the boys is something to be appreciated. Nothing is quite as gorgeous as the beach they spend most of their days on, always a sight to behold even when shot from afar to emphasize the isolation from the world that their relationship brings them.

Watts and Wright both impress often and their work in Adore is no exception. Robin Wright in particular is surprising, with an accent that sounds genuine and an emotional performance that’s a complete turn-around from her work on House of Cards. Even when the story drifts into a couple of slow points, their work remains the film’s best feature. This isn’t to say that the boys aren’t good too, but Xavier Samuel is the only one of the two who really seems to give it his all, delivering some emotionally intense scenes.

Adore doesn’t provide all that much closure and amps up the melodrama in its final act, but it’s still a beautifully shot piece that actually makes for an interesting watch.