Ghost of a Chance, A 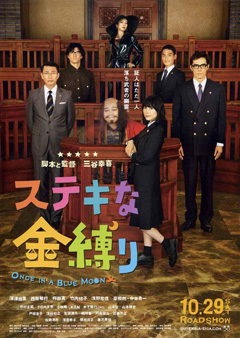 Clumsy attorney Emi Hosho (Fukatsu) gets her last chance to save her career when she has to defend a man (KAN) accused of killing his wife (Takeuchi). His alibi? A case of Kanashibari (Wikipedia) performed by a 500-year-old samurai ghost, who must show up at the witness stand in the trial.

How can you NOT be interested in that premise?

If you’re familiar with Japanese comedies, especially in the jdrama format, you have probably seen your fair share of clumsy female leads — from the likes of Noda Megumi in the Nodame Cantabile series, or the female leads in both Keizoku and Keizoku 2: SPEC. The difference is that in these series, the clumsy female leads are incredibly capable of whatever task we may throw at them.

In the case of Emi Hosho, we aren’t so sure, but Fukatsu’s charisma makes us root for her all the way through. Trying to uphold the name of her famous attorney of a father (Kusanagi), Emi still mourns his lossa bit . How do you make someone proud when they’re already gone?

When suspect Goro Yabe tells her that he couldn’t have possibly killed his wife because a samurai ghost had been sitting on him all night long, Emi and her boss Hayami (Abe) have no other way but to believe him — if he really were guilty he could have come up with a much better alibi, right? So Emi travels to the Inn in question only to discover the samurai ghost story is real when Rokubei Sarashina (Nishida) ends up sitting on her chest at night.

But how do you get a ghost to go to court? That’s the comedic genius of the story! Especially with Fukatsu and Nishida playing against each other. How does a 500-year-old ghost in modern times act up? Toshiyuki Nishida — you may recognize him as the ramen expert in that Brittany Murphy movie, Ramen Girl — is perfect for his role in A Ghost of a Chance — he usually is in his comedic roles like the one in Tiger & Dragon. He works those facial expressions and his tone of voice to the point where you don’t want to miss a beat of his samurai.

The film does get a bit long for the sake of comedy — running a bit longer than two hours — and gets sentimental by the end of it, but I think it works to make A Ghost of a Chance more than just a silly crime comedy. Then again, I like sentimentality in my movies especially when it has to do with family matters.