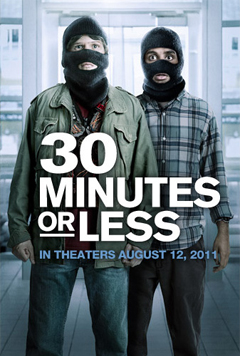 Ruben Fleischer — after directing the wonderful Zombieland — brings us his sophomore film, 30 Minutes or Less, which unfortunately does not pack quite the punch that his debut did.

30 Minutes or Less follows a young pizza-delivery guy named Nick (Eisenberg), who just happens to have an absolutely miserable life. His best friend is Chet (Ansari) — who is now teaching at a local elementary school. Meanwhile, Dwayne (McBride) and Travis (Swardson) are two losers who are living off of Dwayne’s father and want to kill him in order to get their hands on a large sum of inheritance money. Needing $100,000 in cash to hire a hitman, he gets the bright idea to kidnap a pizza delivery guy. Once Dwayne and Travis jump Nick, they strap a bomb onto his body and tell him that he must get them the money in ten hours or they’ll let him explode. With only a limited amount of time, Nick must rely on his best friend Chet and do the only thing that will get him that kind of quick cash: rob a bank.

It goes without saying that Eisenberg and Ansari steal the show. If not for them, this movie would be an absolute disaster. While Jesse Eisenberg is most known for his recent Academy Award nominated performance in The Social Network, this role feels much more like his work in Adventureland and Zombieland — awkward, dead-end job, cute, interested in a girl, etc. Luckily enough, it works for him, as per usual, and doesn’t feel forced at all. It also helps that Fleischer and him have worked together before and the collaboration seems to be a great one. Ansari — known for his character on Parks and Recreation — also did a great job and the scenes between the two are fantastic. He has an excellent comic delivery and provides many of the laughs from beginning to end. The most notable of their scenes is definitely the bank robbery which plays out hilariously, as well as many of the simpler moments between the two.

Everything may sound great and pleasant so far, but unfortunately there’s more to the film than just Eisenberg and Ansari. It’s the writing for McBride and Swardson that left me groaning aloud in frustration. I’ve always had a 50/50 thing with Danny McBride and in this film I was not a fan at all. I’ll go ahead and blame it on the terrible writing job because Swardson was brought downhill with him as well. Not everything between the two was horrible and they did put a smile on my face once or twice, but most of their lines felt completely forced. The worst thing about the dialogue between them though was that it involved unnecessarily vulgar lines, racial slurs, and crude jokes that plenty will laugh at, but I was annoyed by.

Unfortunately, the terrible writing that Swardson and McBride were brought down by was not limited to them. Michael Peña’s character also suffered heavily — both by his performance and by the poor attempt at comedy writing. His over-the-top performance as a gangster mixed with the ridiculous lines he had to deliver made this almost unbearable at times. I was taken aback at just how unnecessary his character was, and wondered why anyone would willingly perform any of those lines — especially someone with talent.

Plenty of people will find this downright hilarious, but many of the jokes left me wanting to escape and watch a decent comedy. Although some of the scenes were very well executed and it certainly had some charm, 30 Minutes or Less inevitably ends up being a sophomore slump for Ruben Fleischer.

P.S: If you do go see this against my warnings, there is a scene after the credits that you may want to stay for. I must add further warning by saying it is shamelessly sexist.