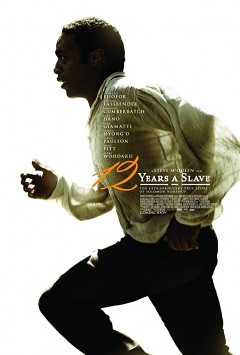 For all the talk of an abundance of slavery narrative films around, it’s rather surprising just how few there actually are. Some cite the fact a couple of films have arisen in the past years – Django Unchained, Belle, and Lincoln among them – as a thematic trend, but considering so little a lot is a grave misunderstanding. Something so intricately tied to American history cannot be easily shrugged aside and it’s no surprise that modern filmmakers find it a poignant subject to explore in this supposed post-racial day and age; a time where the privileged white man continues his tirade of abuse against all minorities. Additionally, a film that provides a genuinely strong voice for African American’s that isn’t helmed by a white man is hard to come across. Here, in Steve McQueen’s adaptation of Solomon Northup’s autobiographical work 12 Years A Slave, we find one which could arguably be considered the most unflinching look at America’s dark past yet.

McQueen’s film revolves first and foremost around Solomon Northup’s tale, in which he is stripped of his life as a free man and sold into slavery. The knowledge that any person’s life could disappear in the time it takes to crack a whip is chilling enough, but the events that follow make it all the more tough to watch. The fear of pain, of death, and of losing oneself can all be seen in actor Chiwetel Ejiofor’s face and body language, making him the perfect protagonist as he commands the screen even in moments of silence. He is a man trying to survive in a world that leaves so many dead; a world reflected in both his story as well as what is shown of those around him.

An early scene of Solomon being transported by boat with other black men and women begins this glimpse into the fates of other slaves. Two of his companions and him showcase the three possibilities of the life he has been thrust into. One finds death, stabbed for interfering with a white man. The other finds some semblance of luck, as his former master appears to save him from whatever horrors may have lain ahead. Solomon, however, remains trapped. All of these possibilities are further explored throughout, with the women especially showcasing some of the harshest aspects of slavery.

However much 12 Years A Slave is Solomon’s tale, its depiction of what female slaves have to go through proves just as insightful. Each one is fully formed in her own way, regardless of sometimes limited screen time, delivering experiences that Solomon himself could never encounter. Adepero Oduye’s Eliza shows the grief that comes with losing your children, a grief that Solomon keeps hidden at all times. Her screams and wails ring on in background, long after the fiddle begins to play to maintain the white man’s peace of mind. Alfre Woodard’s slave turned mistress to a white plantation owner reveals the closest thing to freedom that a slave like herself can find, bitterly reminding everyone that God has a fate far worse than the pharaoh’s for slavers.

But it is primarily in Lupita Nyong’o, in her debut feature role as Patsey, that we see glimpses a character whose long-standing suffering is far worse than Solomon’s with almost as much care as is given to the main character. Her story is that of a woman trapped in an incredibly abusive relationship with her married plantation owner, Edwin Epps, played by Michael Fassbender. She begins the film in her master’s favor, picking over five-hundred pounds of cotton every day and pleasuring him sexually in scenes far more uncomfortable to watch than Shame. But their relationship turns sour quickly, leaving her beaten, bruised, and begging for Solomon to end her life – a request that he cannot bear the weight of. The moments when she pleads and barters for death with him, as well as one where Epps forces Solomon to whip her until her skin is nothing but bloody tatters, are some of the roughest to watch, throwing an immense moral question at the audience: would you kill someone to save them from an unholy fate even if it meant potentially damning your own?

And that’s what Steve McQueen loves doing; placing every single person who encounters this film in a situation where their sense of right and wrong is questioned at every turn. Being forced to watch the crimes committed is enough to make one shy away, but McQueen is determined to make one understand that “nice” doesn’t always mean good. With the husband and wife duo of Fassbender and Paulson, we witness the epitome of evil. When Paulson grabs a bottle and tosses it right at Patsey’s face, it’s enough to make one jump in more fear than any horror film. Even when it comes to the “nice” slavers, specifically that of Benedict Cumberbatch, Eliza warns Solomon not to trust. While he may bestow Solomon with a violin for being a smart slave, a “nice” slaver is still just that: a man who owns slaves.

Where it was fun to see Tarantino’s Django whipping his white male oppressors, it was terrifying to see Solomon do the same to Paul Dano’s character after an argument, knowing that the slightest misstep could result in his death. Writer John Ridley quickly confirms that terror, facing one with that exact fact minutes later, as Solomon hangs on the brink of death, circling around on the tip of his toes to stay alive. The way director of photography Sean Bobbitt frames this scene is the most disturbing thing of all – forcing us to watch him in long takes while the other slaves avoid him for their own safety and children even play in the background. There isn’t a minute that goes by in the film that we aren’t aware of McQueen and Bobbitt’s artistic aspirations, and while some may nonsensically complain that it’s “too artsy,” the look always feels right.

In fact, 12 Years A Slave might be one of the greatest reflections of the directors career to date – so embedded in his own style and rich with similarities to his past works, especially those in museum exhibits that so few have had the pleasure of seeing. But that beauty we see on screen never betrays the horrors being depicted. Even when the camera sidesteps showing us a whip cracking against a body, we are faced with the blood and scars immediately after. Bobbitt’s use of lighting in particular, with letters becoming ash and Solomon being left alone in the darkness, often works to represent the candle that is Solomon’s fading hope finally burning out. If anything, the only complaint that can be made against the film’s artistic production is geared at Hans Zimmer, whose score kicks off with the same overbearing horns he’s become reliant on. It’s a distracting feature that luckily fades away into something more akin his work on The Thin Red Line, complementing both the beautiful and horrific visuals.

For all the darkness there is to find in American’s past and in Steve McQueen’s film, there’s an ultimately uplifting feeling that comes along with it as well. It’s something that some will consider to betray the film’s uncompromising nature. Personally, it feels like an aspect that, if missing, would render Solomon Northup’s journey incomplete. And a lengthy journey it is, but it’s one that never feels like the twelve years the title claims. While that may be due to McQueen’s streamlining a memoir into a just-over two hour film, 12 Years A Slave deserves as much praise and discussion as it does cricism for serving as a brilliant and harrowing depiction of Northup’s years of enslavement bleeding together as he loses track of his past.