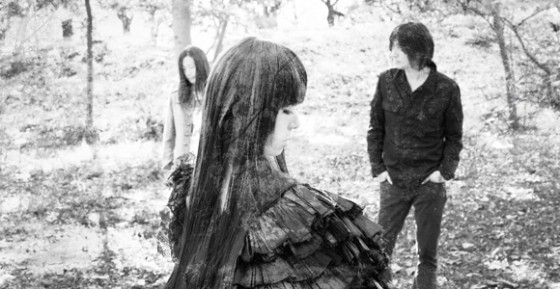 Celebrating the 10th anniversary of Shunji Iwai’s masterpiece, All About Lily Chou-Chou, the fictional singer embodied by Salyu and produced by My Little Lover’s Takeshi Kobayashi released a new song, Ether (エーテル), and performed at the Nakano Sun Plaza Hall for 2000 lucky fans on December 15th. A unique show for a cult band.

Whereas few hardcore fans came there with green apples marked with their email address, most of the audience was acting pretty normally, waiting nervously for the concert to start. Movie soundtrack was playing in the packed concert hall and messages were popping on Twitter until the last minute. Everyone held their breaths when the lights went down and our beloved myth wrapped in an asymmetric black dress started singing Resonance (Empty Stone) [共鳴(空虚な石)]. Cryptic — sometimes psychedelic — visuals, playing with textures and colors on Lily’s cave walls, a mixture of metallic and mineral elements, and purple lights focused on the enigmatic vocalist, letting the band in the shadow most of the time, were adding mystery to the show.

Lily jumped from song to song without a single word toward the audience, and no one made a sound during 90 minutes, except for a few shy applauses after the first song. From the start until the very end, everyone seemed stunned by the realness of the moment, hypnotized by the ethereal beauty of Lily’s powerful voice. Lily’s voice or Salyu’s voice? Hard to tell after the five first songs (Resonance, Love Experiment [愛の実験], Airship [飛行船], Saturation [饱和] & Erotic [エロティック]), when the band switched to Salyu’s discography for the following five (Regeneration [再生], Item, Mirror [鏡], In the Night Sea, a Far Off Meeting [夜の海 遠い出会いに] & Platform[プラットホーム]).

The magic was broken at this moment for some fans who were there for Lily, not her second life: witnessing the personification of the myth was a cruel disappointement. Hard to be satisfied by the mundane reality when you worship fiction, hard to realize Salyu’s avatar isn’t the music goddess offering life-altering music universe, contrary to what All About Lily Chou-chou made us believe. And yet, Salyu/Lily performance was actually brilliant, touching, and amazingly powerful!

Their respective songs have been produced by the same team but are clearly in different atmosphere ; Lily’s sound fragile and desperate, Salyu’s are more luminous. Despite this, the setlist was smartly thought, incorporating darkest Salyu’s tracks in Lily’s ether.

Arabesque [アラベスク] reminded us how Björk influenced her work, and after three more Salyu’s tracks (Sand [砂], Landmark & My Memory).

Finally, Lily came back to stage for a dream-like ending: the 8 min long and yet short 2010 single, Ether, a perfect balance between Salyu and Lily’s sound, and the main hymns of Iwai’s soundtrack, Flightless Wings [飛べない翼], Recover from Wounds [回復する傷] and, of course, Glide [グライド] in an frustratingly short acappella version.

Without a word, the band took a bow to thunderous applause and left the stage, letting the concert credits scroll up on the screen. « See you soon, not so far… » they wrote.