Zombies vs. Robots: No Man’s Land 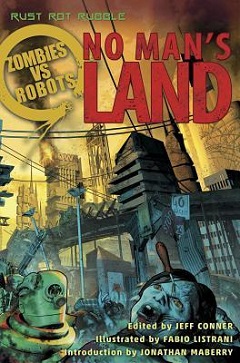 With so many stories about zombies, why don’t more include robots? Robots can’t be infected by zombie bites or blood disease or dying. Would they be humanity’s best hope for staying alive? This fifth prose offshoot of the Zombies vs. Robots comic book anthology explores the consequences of deciding to use robots or robotic suits in the fight against the undead. These writers take on one or more aspects of this imagined future to see how human and robot would function.

The book starts with the story “Meaner Than A Junkyard Dog,” which is satisfactory at best in its prose and simplistic characterization. Yet by looking at the testing stage of robot mobilization, as well as the private security issues in gated communities, the story does direct the reader toward thinking about the mechanics of the overall concept. This introduction could have been acceptable buildup to better fare.

Instead, it is followed by Jon McGoran’s “Killer Outfit,” whose critique of machismo hampered by poor writing (“Muffled but loud, the moaning of a pack of zombies. A big one.”) and undeveloped female characters. The story hints at nothing past the protagonist’s view of the two available females hot bimbo and slightly smarter and curvier woman, both sensitive and mouth-gaping scared. He takes a second to remember his dead wife, who might have been one of the few women who didn’t sleep with their pastor, “not just because she’d gone and got fat. She was a good lady, and she was his.” This character then fights a more rash and aggressive guy who would do anything to win the attention of the two women. Spoiler alert – the protagonist wins, and the ending winks and nudges that the women’s “earned” fawning adoration will lead to the protagonist’s genes repopulating the earth. McGoran gets a second chance with “Chili Night” later in the volume, a slightly more accomplished tale of male power plays. It’s more simplistic than it thinks, but I’d take its blood and guts nastiness over the sexism of “Killer Outfit.”

“AB-IV” starts at the bottom of the sea and gets stranger from there, reanimating vintage pulp adventure tropes with little of their energy. “Farewell to the Master” follows a mother chasing after her genius daughter to the island of a famed recluse. Once on the island, they encounter a jarring twist ending. Yet not all of the stories are disappointing. “Paradise of the Lost” is simply-told yet satisfying with its twisted, self-contained survival horror. “The Wall” also has basic prose, but it also possesses welcome care towards its community of survivors

The only style standout is Stephen Graham Jones’ “Geneses.” A robot, recounting events in a heightened archaic (but slyly self-aware) mode, aiding a cure-obsessed scientist through time-travel trials. Though the story’s conclusion might seem abrupt, it’s a refreshing break from the predominant strain of middling prose. Yet the best story is the final tale, “The Iron Samaritans,” in which Mennonites flee the living dead. While trying to adhere to abstention from violence and modern technology, the group happens upon a ragtag group of robots. This final piece travels surely through the thematic territory of existential and ideological crisis; where other stories in the book stumbled, stomped, or tread with too light a step. In the end, Zombies vs. Robots: No Man’s Land has more thought-provoking ideas than its title would suggest. If only more of its writers had the skills to convey those ideas through story.

No Man’s Land is available as an ebook at Open Road Media, along with other books in the Zombies Vs. Robots prose series: This Means War!, Z-Boyz in the Robot Graveyard, Women on War, and ZVR Diplomacy.