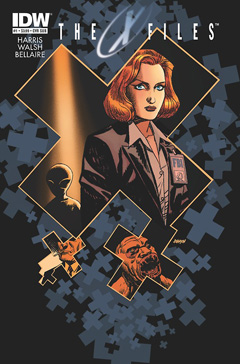 Forget crowdfunding — seems comics is the place to go if you never want to see your favorite TV show ever die. Buffy, Jericho, Smallville; all of these shows have found new officially sanctioned ‘seasons’ through publishers like DC and Dark Horse, with IDW being the best known on the comic scene. The X Files is the latest addition to their roster, taking the rights from DC, who published a  limited ‘lost season‘ 5 years back as promotion for The X Files movie sequel, I Want to Believe.

I don’t want to believe that movie happened, or the final TV season for that matter. I stuck with The X Files even when the only remaining fans left were middle-aged Philes still shipping agents Mulder and Scully together even after they’d officially ‘shipped’ on the show. The offspring of that union was the genetically modified William, whose birth marked the show’s final 9th season in 2001, and the moment when I finally tuned out.

William getting namechecked in this issue is the only problem I have with this ’10th season’ so far, a monthly run which also marks the first time the comics have actually followed on from the TV show continuity. Like in the 2nd movie, Scully is busy being a doctor, and Mulder continues to be a professional layabout, until old FBI boss Walter Skinner informs the couple of a computer hack targeted at the duo’s old case files.  Very contemporary, and a prime set up, but the moment Scully mentioned William, I did get that sinking feeling that the hack was centered around the latter, which means little Willy’s coming back. Sigh.

The use in this issue of an alien-obsessed cult kidnapping Scully brought back bad memories of a 9th season episode wherein the same thing happened because of this Maybe Baby Messiah. Say it isn’t so, IDW?  I’m all for progression, but let’s face it, people want to see Mulder & Scully in business suits, chasing mutants and inbreds in Blair Witch Americana. DC got that right with their 2008 run. There was none of the mythology which killed off the show (and, indeed, a lot of the show’s beloved characters for no good reason – Lone Geekmen & Ratboy Krycek, RIP). Is that too much to ask? I know the 2nd movie had no mythology and tanked horribly, but that was because it was all about pedophiles and head transplants, and wasn’t really an X File. And IDW also owns the Doctor Who comics – didn’t they see how badly the eerily similar Baby Pond arc was handled in Who’s 6th season?! The X Files invented the whole mythology trend, but the show itself was the best example of all that’s good and bad about having such lengthy and muddled story arcs.

The issue gets a lot right, though. The characters ‘sound’ exactly like they did on the show, and the artwork reminds me of the ‘scratchy’ style of Charles Adlard. Adlard is now famous for  The Walking Dead comic, but back in 1995 he worked on the first ever X Files comics, as published by Topps during the show’s golden age. I grew up on those stories as much as I did with the show, and I hope this new run can replicate the same disquieting and philosophical tone, and perhaps even create its own mythology, just like the 90s issues did. I guess I want the X Files to be finally free of the show itself. It’s the only way it can progress and resurrect with an entirely new audience. So far this comic seems like a step back in the wrong direction. The reboot is out there…