Arthur Phillips – The Tragedy of Arthur 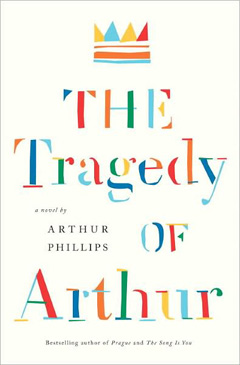 “What king forged I? All England will be judge.”

Phillips is a skilled writer; the unadorned quality and unfussy wit of his prose invisibly bring out an entrancing effect during several breathtaking passages. When those spells break, the story is strong enough to keep one reading.

At times, the “author”-narrator comes off as indulgent, overanxious and close to whining. While this is not always likable, it’s understandable given the conceit and the character-narrator’s personality. Even if the narrator seems to have fantastic luck in attracting women, those relationships don’t end as he expects. Aspects that initially feel predictable or overblown end up upending reader expectations as well.

Characters are rendered in precise dashes of description, holding true throughout the book — notably the standout creation of Arthur’s vibrant twin Dana. Though there are high stakes for family and reputation, as well as parallels and fashioned coincidences evoking Shakespeare, Phillips contrasts the plays’ grand drama with a grounded tone and modern low-key comedy. There are enough messy details to maintain the realistic setting and to prevent the story from appearing too neat.

The main text of the novel is contained within the book’s “Introduction.” What follows is the play in question: “The Tragedy of Arthur.” The play itself is an excellent read, still fascinating even after the Introduction’s endless discussion of its faults and merits.

Keep an eye on the footnotes too, for there are brief comments from the “author”-narrator and a Shakespeare expert that add a little more humor and illumination to the core mystery.

No matter whether Shakespeare stirs your appreciation, dislike, or indifference, The Tragedy of Arthur is an engaging novel, blurring the borders between authenticity and forgery, and examining The Bard’s hold on Western culture.