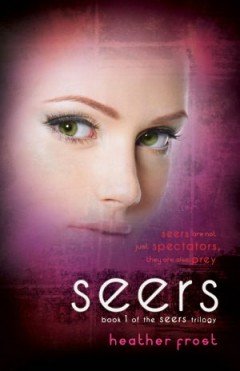 I’m not sure why I’m attracted to books where the protagonist’s parents are dead, yet she smiles through it because she doesn’t want to worry everyone around her. But as a late birthday gift, I’m once again enjoying a book with similar tragedies.

This is Heather Frost’s first book, set to be a trilogy. At first, the story is a bit slow because we are dealing with understanding a tragedy so great — a teenage girl dealing with surviving a horrific car accident that claims both of her parents, and having to be strong for her younger twin sisters.  Her grandparents move into their deceased son’s home, so that the three sisters will have at least one solid thing in their lives.

After she first wakes in the hospital, Kate Bennett reflects briefly on the first day of school where she realizes she can see people’s auras. She hides what she believes to be a curse from others. To add to her growing troubles, her relationship with her boyfriend becomes rocky. Unable to face that her relationship might meet its end, she attempts to make her life as normal as possible, even if it means faking it.

During her first period class, Kate meets Patrick O’Donnell, an Irish transfer student whom she finds attractive. She quickly brushes her attraction aside, but when she takes a good look at him, she knows he isn’t like anyone else. For one thing, she cannot see his aura, which sets off warning bells. She makes sure to keep a safe distance from him, but it’s difficult when he shows up in all of her classes. Yet, she is unable to shake the feeling that something is terribly wrong with him.

Trying to understand her new sight she grows to trust and form a friendship with Patrick.  With increasing feelings, she learns she is caught up in a war between demons and Guardians and there is no way out. Patrick reveals to Kate that he is a Guardian sent to protect her from the demons that wish to use her powers against his kind.

As soon as Kate accepts that she is a Seer, a being able to see demon auras and Guardian silver lining, she realizes that demons are tricky and will do anything to get her on their side. Her sisters are taken, and she teams up with Patrick and his partner Toni, her safest chance to get them back. But in order to do that, she must take their place.

I thought the first book of the Seers Trilogy was well written by an author wise beyond her years. I could tell the love that was put into the book. It’s well thought out and something to pass your weekend with. I love the world in Seers. It was written in a way that shows demons, auras and guardians can exist with us being none the wiser. I can say that this book will have your imagination flowing, heart racing and leave you wishing for a Patrick O’Donnell of your own.