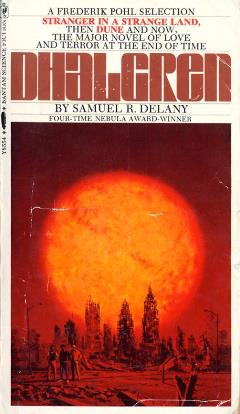 Bellona: a city, somewhere in the United States, where the clouds rarely part for the expanding sun or two moons in the sky. While armed forces are stationed outside the city, people flee the city while the occasional visitor enters. A man arrives, twenty-seven years old though his birthdate might beg to differ. He becomes known as “The Kid,” an aspiring poet and unexpected (even to himself) authority figure and center of attention.

Dhalgren has polarized audience since its publication, with reactions ranging from acclaim to disgust. Delany is often noted as a major Black queer voice in American science fiction. He’s a skilled writer who can handle shifts of  subjectivity and command of intimate to epic scope. Through a sci-fi lens, the novel portrays an uneasy new American world, undergoing the transition from the late 1960’s to early 1970’s.

Dhalgren depicts Bellona as a microcosm of diversity dynamics in the United States. Characters occasionally break into heated discussion about race, class, gender, and consent. The Kid is half-white and half-American Indian, and this fact seems to be a major point since several characters comment on his dark skin. Yet the female characters that draw The Kid’s interest seems like flower-child predecessors of the “pixie dream girl” trope. Gradually, the main female romantic interest, Lanya, shows a voice and life of her own. Delany illustrates (with often graphic detail) different sexualities, and The Kid and Lanya enter into a polyamorous relationship with the teenager Denny.

Dhalgren is wandering and episodic, conveying the drifting atmosphere but unable to deter reader boredom or annoyance during stretches of tedium. Much of what might have seemed transgressive when published could seem like laughable hippie fantasy to readers today. The first scene even has a flower-child-like woman walking around, naked, eager to have sex with the protagonist she’s just met. Yet the characters don’t lull in peace and love; many fall into organized looting and violence for fun and survival. Bellona itself is named after the Roman goddess of war.

Despite the experimentation abounding in Bellona, it still features many small-town dynamics. There are nuclear families trying to uphold the appearances of a traditional home, and community gatherings hosted by the editor of Bellona’s daily paper. People are either caught up in the tide or left behind in the currents of power and personality, scrounging for a life in an unstable world. People have described Dhalgren and Bellona as an event horizon, a full circle “point of no return” where the pull of forces makes escape impossible. Characters wonder why other American cities remain unaffected, and The Kid sometimes ponders if he ever left the mental institution of his past.

Dhalgren is now available as an ebook, along with eight other Delany novels, at Open Road Media. The company has also posted a video featuring science fiction authors like Delany, Octavia Butler, Walter Moseley, and others speaking in recognition of Black History Month.