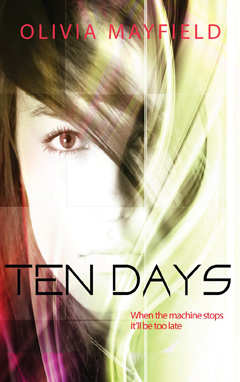 My heart sang with the angels when I finally got to read sci-fi. The best sci-fi book, one I read in just one sit down, I found for $0.99 on smashwords. A book by talented writer, Olivia Mayfield. The story is based on The Machine Stops by E.M. Forester. As I read the synopsis of that book after reading Ten Days I got chills and sat for a moment when the “what-if’s” started popping into my head. As we progress with time our reliability with technology becomes so great it’s hard to tell where our independence begins and our dependence stops.

Cally is one of the citizens of the new world hidden underneath the Earth after the air grew toxic and they were driven down into the ground. From birth they are raised to be dependent on The Machine. It will give you water and food when you ask, and in return you must be an upstanding citizen. This is hung over Cally’s head a lot since the woman who birthed her is on the Committee that oversees the new world.

Marshal is Cally’s best friend. They grew up together and were told how to live. They were dropped into pods when they were told they were old enough to take care of themselves.  They communicate through video messaging. They are able to visit face-to-face with each other, but it rarely happens and is looked at oddly because — no one needs the physical touch of another human being when The Machine does everything for you.

In a society that has lost what it is to be a human being, Cally and Marshal seek the things that are now viewed as uncivilized behavior — love and the company of another. When The Machine starts breaking down, sending the members of the society rotten food and dirty water, everyone is calm because they believe the Machine will repair itself. But Cally and Marshal seem to think the worst is yet to come. Panic rushes through the world underneath Earth as no one knows what to do to stop it. Cally and Marshal must risk everything they have to rescue the ones they love.

Ten Days is a thrilling sci-fi book that grips you from page one. The backstory is subtle as you learn why and how the humans ended up to where they are now. You get a glimpse of how relationships are between those who follow the exact rules of The Machine.