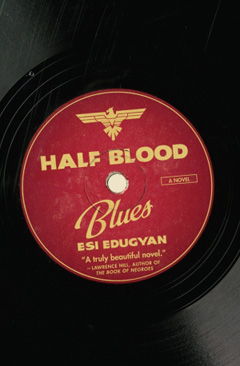 Blues wasn’t never about the chords.

Sidney “Sid” Roscoe Griffiths is an African-American stuck in the land of the Third Reich. He is the much-overlooked bassist for the Hot Time Swingers, a band popular for bringing true hot jazz to late 1930’s Germany. Everyone’s eyes and ears are directed toward the group’s astounding young trumpeter, Hieronymus Falk, the son of an African French soldier and a German mother in the Rhineland. Sid’s jealousy and protectiveness of young Hiero intensifies while the band hides and runs from the Nazis.

Sid tells this story with a lovely conversational flow, peppered with words picked up from Berlin to Baltimore. Shifting between WWII and the surviving band members in 1992 can be jarring, though the split timelines come together well for the conclusion. Edugyan’s prose is most brilliant for the scenes set further in the past, especially how words and notes from different traditions blend and jump in, in conversation or jam session. It’s a wonder how she illustrates the complexities of jazz. Her insertion of a matzo-loving Louis Armstrong into the proceedings is a mostly tight fit, though the legend sometimes stands a little odd against the other fully-formed fictional characters.

These characters are people scraping for honest pride in their work, with a realistic tangle of complicated motives and regrets. Half-Blood Blues sidesteps many sentimental pitfalls with humor and insight. The story may strike most readers as perfect movie material. However, the novel itself has a unique power, a particular aural memory quality that arises from imagining music and voice.