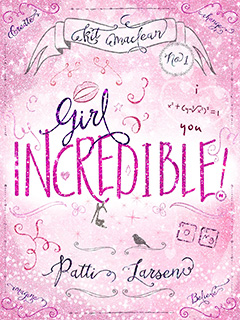 While attempting to write a review for Girl Incredible I got really frustrated. Due to a great loss in my life, I haven’t written a review in over a year. I felt honored to receive this book, and knew I wanted to give an honest review. The same night I received it, I stared at the pink cover with its cursive font and put it aside. It caught my attention several times, so I opened to the first page, read a great chunk of it. The very next day I finished it.

My initial thought was how truly different and remarkable the story turned out to be. I say different because the main character, Kit MacLean, also lives in her own world as Kitalia Ore, a psychic spy for the CIA. At first you may get a bit confused with the switching from Kit to Kitalia. However, I quickly came to realize that Kitalia’s situations are that of Kit’s but with more guns, bad guys, and victory against the enemy.

As a bullied child Kit was given a book by her older sister called Grace Grant, Girl Detective, which sent her on a path of trying to be a likeable girl who sees all the greatness in everyone and everything. To protect herself from any bullying she dedicated herself to being as amazing as Grace Grant.

She believes everyone is her friend, when in reality she is thought of as weird and occasionally called stupid for doing abnormal things like asking for extra homework and speaking with everyone who will look at her.

When Tom Brown, the school bully at Rimtree High, targets a new student named Tate, Kit relies on Kitalia’s bravery to help him. Tom does not appreciate Kit getting involved and makes her a target as well.

As Kit tries to maneuver her way through the school to find out why Tate is being bullied she comes to find out that Tom is targeting half of the school. He holds hard photo evidence that may harm the students over their heads to force them to do whatever he asks.

As memories of her own bullying start to resurface, Kit realizes she has to save herself as well as the student body with quick wit and a goal to unite everyone and challenge them to face their own fears.

The book’s message about bullying is obviously important for those in school. But bullies also lurk outside the schoolyard. We sometimes work with, walk beside, or even drive among them. As human beings we shouldn’t be looked down on as less than any other person. What I took from Girl Incredible was to keep my head high even through the hardships. Kit is incredible, and so are we.