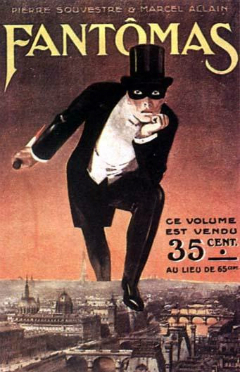 Hello! My name is Diandra, and since this is my first post for YAM, I decided to review something exciting.

A murder at a château leads the reader into a world where danger can strike at any time, and any person can be impersonated. The wordy prose in this translation becomes breathless when detailing action or hurried thought. Certain parts can be trying or unintentionally hilarious to modern readers, but the momentum and excitement of the twist-filled plot is infectious. Though the book and the four sequels I read are unashamed of their pulp entertainment quality, there are descriptions and moments throughout the series that one could call brilliant without qualification.

Fantômas, like other works of the time, has ladies fainting from emotional and mental exhaustion, and a male gentleman protagonist always mindful of manners. However, the character Fantômas is among the first popular villains of his type. He can be anyone, anywhere, and his name means “phantom.” Intelligent and ruthless,  Fantômas does not shy away from murder, but is sometimes satisfied with sadistic manipulation and torture. A villain (and some say anti-hero) for the 20th century, he has no grand passions or loyalties leading him to crime. He does not discriminate between rich or poor in his choice of victims. Humanity is simply his toy.

Vivid, if somewhat two-dimensional, characters are entangled between elaborate backstories and unpredictable current dramas. There are intriguing details that hint at a deeper personality of a side character, but the primary focus of the novel is to find the killer. Is Fantômas the killer, or was it someone under his control? Is Fantômas even involved, or is the connection wild speculation born of fear and rumor?

The reader discovers that Fantômas and his associates have infiltrated every level of society. One might argue that the popularity of Fantômas stemmed from how the character symbolized worries of the time: corruption, urban crime, and lack of individual power amongst the institutions and masses in the city.  Resemblances and parallels are major tropes in the first novel and its sequels.  Even the brilliant detective Juve, the sole detective stubborn enough to keep on the phantom’s trail, shares the criminal’s gift for disguises.  Only brave, committed representatives of police and the press can stand up to a criminal who can exploit the justice system itself.

These adventures have a surface of energy and rollicking melodrama. Yet their true power comes from constant suspicion, where innocence and even identity can be doubted.

The 1915 English translations of the first five books are in the public domain and can be downloaded here.

The Fantômas series made fans of Surrealists and other members of the avant-garde, and more information about his influence upon their works can be found here.