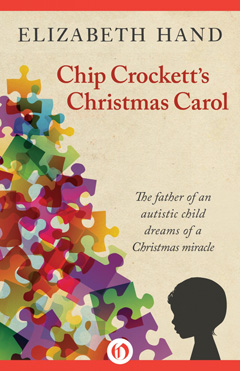 In Elizabeth Hand’s loose retelling of Dickens’ Christmas Carol, Washington D.C. lawyer Brendan Keegan is both Scrooge and the father of Tiny Tim. Brendan has joint custody of his four-year-old autistic son Peter, works on childcare education and routines with ex-wife Teri, and hopes for the day when his son will speak. Then Brendan’s old friend Tony Kemper, an aging punk rock star yet to grow up, asks Brendan for a place to stay. Thus Brendan’s life grows more complicated right around the Christmas holidays he dislikes so much.

A get-together of friends near the beginning is embarrassing to read for its very basic middle-aged, middle-class guy conversation,  even if it’s true talk for some middle-aged, middle-class guys.  The prose is competent, too simple for some tastes, and the story takes its time to gain reader interest.  Yet the novella soon becomes engaging when we start seeing more sides to the characters. I sped through the last third because I wanted to know what happened next!

The story begins when Tony calls about the death of Chip Crockett, a beloved children’s TV show host. This news brings sadness as well as nostalgia for the host and his old program. Hand has a sci-fi background, and while this isn’t a sci-fi story, she also shows respect for her characters’ fan appreciation of things like punk rock and children’s TV shows. Everyone can be a nerd in one way or another, and in the story these interests can help more than hinder other aspects of her characters’ lives.

Hand is also respectful of challenges and people’s struggles and frustrations, setting her characters on a journey towards a well-earned conclusion. Her foreword for the ebook version comments with amused modern perspective on her characters’ quaint early internet usage, with their behaviors such as writing long strings of urls onto paper. The straightforward prose disguises some more complex devices working in the story, such as the shocking recurrence of a phrase containing the words “three minutes.” Chip Crockett’s Christmas Carol is not only concerned with characters’ problems in the present but how people react to and incorporate memory.

Striking out from its Dickens inspiration, this Carol’s characters can’t visit the past or the future. Fans of Chip Crockett’s show must search for any recordings that might have escaped a studio fire, and Brendan cannot go back to the short period of time before his son developed autism. They must make do with what they have now, when ghosts of memories don’t just haunt but bring new moments to life.

Chip Crockett’s Christmas Carol is now collected as an ebook here. Royalties from the ebook will be donated to Autism Speaks, in the memory of special education teacher Anne Marie Murphy. [1]