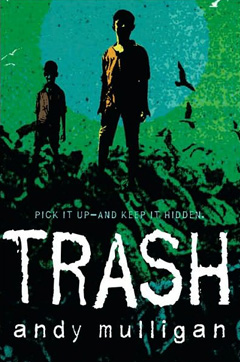 Raphael, Gardo, and Jun-Jun the “Rat” live in the trash and make a living from the trash, picking through heaps to find recyclables and other items to sell. Most of the time, they find worthless rubbish, sometimes even human waste. One day, Raphael finds a handbag whose contents entrap him in a conspiracy of money and murder.

The story unfolds through the kids’ after-the fact accounts joined by those of other characters who helped or observed them. Author Andy Mulligan creates appealing voices for the three heroes. Though they are budding teens stuck in a festering dump for a home, they have energy and excitement that readers may associate with younger protagonists. Two foreigners who help the trash heap children are straightforward do-gooders, but they sound believable in-story through “their” words.

Press materials state that Trash is set “In an unnamed Third World country, in the not-so-distant future.” Yet while reading, all the details of character names, typhoons, pesos, and places like Green Hills shouted “Philippines” to me. My suspicion was confirmed with the mention of the Tagalog/Pilipino honorific “po.” Generations of families living in trash heaps like Smokey Mountain is not a near-future concept in the Philippines. Mulligan states in the afterword that he based much of the novel upon his experiences in the country and has one character “fall in love” with Philippine people, culture, and natural beauty. The upcoming UK-produced film adaptation, however moves the action to Brazil, where they are filming in Rio de Janeiro. The Philippines and Brazil may have a similar colonial past and corruption-filled present, but one wonders what production decisions led to trading one “third-world” country for another. Then again, while the movie could have pumped money into a Philippine region, there’s a question brought up by the novel (and by comparisons to Slumdog Millionaire): who would really benefit?

Funny that this Empire article on the movie’s casting announcements thinks that the Behala name for the trash mound indicated a place in West Bengal, which probably led to the India location error in this Guardian article that the book’s agent had to correct in the comments. The book was also deemed unsuitable for the younger end of the  6-12 year-old age range for the Blue Peter Awards for violence and swearing [1]. The publisher responded:

I feel that this is a very inspiring, exciting book, with a moral framework, and that their audience at the older end of 9-12 is being denied something they absolutely should be reading….Poor children live a very unpleasant life and to avoid that would be untruthful, and I don’t think one should be untruthful to children. You can’t make life wonderfully safe and middle-class all over the world.

Trash is a fast-paced and engaging adventure that readers might finish in one sitting. For readers of a certain age and upbringing, it’s a gateway to encounter a poverty-set story that doesn’t fall into the doom-and-gloom or “glamorous simple life” pitfalls. Other readers might find this novel relatable through first- or second-hand connections. Mulligan may gloss over the complications of foreign aid as well as the novel’s conclusion and overall conceit of collecting the stories together.  What’s admirable about the novel is that, even given the help of others, the biggest heroes in the story are: a “houseboy,” a prisoner, and three kids who live in the trash.