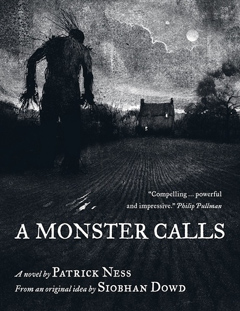 With bullies at school and a cancer-stricken mother at home, Conor now has a terrifying recurring nightmare to add to his problems. Then a tree creature appears, offering ambiguous help: it will tell three stories before Conor must tell one of his own.

A Monster Calls deserves to become a classic for readers of any understanding age. Clear prose works with the striking monochrome illustrations, inseparable like the narrative’s intrusions of dreams into reality and vice versa. This blend of text and image provides a power missing in the illustration-less “grown-up” edition. Never condescending, the book displays how Conor must confront not only fear but all the tangle of emotions brought out by his situation, from helplessness to anger. The book never wallows in sadness either, surprising with wit and unexpected turns. The drama works its way naturally from misunderstandings to eventual understandings between the characters. It’s a also bit amusing as an American to see Conor’s father return from the US with a shifting accent peppered with words like “champ” and “sport.”

“If you speak the truth you will be able to face whatever comes,” says the tree spirit towards the end of the book. The greatest strength of A Monster Calls is its emotional honesty, chronicling everything from clashes of personalities to the dread of oncoming grief. Though younger readers are its primary audience, A Monster Calls has a mature sensitivity rare in any type of literature. Under a carefully crafted surface, it bundles jagged and raw feelings into an ultimately positive experience.