After China’s commercial pop music scene tried some girl group fun with Up Girls, they’re now trying to do it with their new girl group S.P.Y 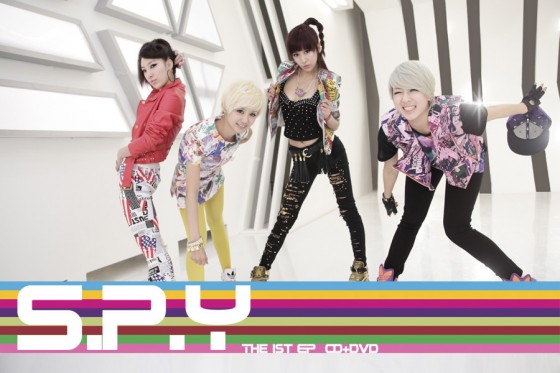 From left to right: Ting, YT, Una, and Dancey.

First, let’s address the elephant in the room: smells like 2NE1.

Put together by TH Entertainment (thmusic.com.cn), the label behind groups such as boy band HIT-5, S.P.Y has been made into a girl group focused on dancing — having won a national dancing competition — and camaraderie, as the group has been hanging out practicing together a while before their debut.

Dance Floor Espionage (舞池諜影) is the first single to promote The 1st EP and was directed by Soon Wook Kwon (who happens to be BoA’s older brother), who has been working as an MV director across Asia with artists like Sori (Real Lips), and S.P.Y’s labelmates HIT-5.

In the music video, we are introduced to the girls as they kidnap a handsome young man. He gets a bit of Stockholm Syndrome because he ends up dancing with his kidnappers.

You can check a YinYueTai version.

Dancey, with her hoody and all, even looks a little bit like Minzy.

We can see what TH Entertainment is trying to do with S.P.Y and we want them to succeed. If the girls are kick-ass dancers like they’re trying to sell them to us, we need to see them dance, but there are too many cuts in this music videos to ever see anything.

Get BOUNCE to direct the MVs for your fast tempo dance songs.

Get COSMOS to direct the MVs for your ballads and slower tempo dance songs.

Visuals are everything. A girl group like this deserves better. Don’t skimp on the money.

Cpop fans, what do you think of this new group?

Kpop fans, what do YOU think of this new group?