Imogen Heap has just released a brand new song called Tiny Human, taking the chance to use blockchain technology to track down its spread. You can basically go visit her website to download the file — it includes the main track, the instrumental, and the seven tracks that compose the song (bass, brass, drums, strings, synth, tuned percussion and vocals), plus the music video, text documentation.

After that- it’s a mystery. You’re supposedly allowed to share/re-post/re-upload this or create a non-commercial remix that shall be titled “Imogen Heap Tiny Human Remix“, but I’ll just share what Heap states on her post: 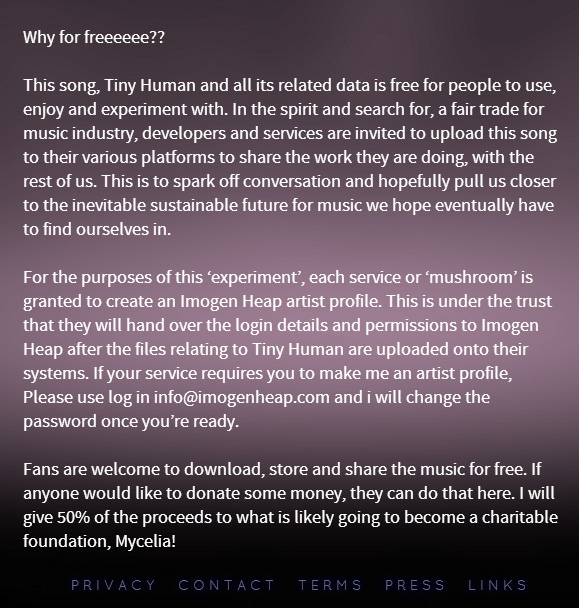 She’s accepting BitCoin payments, though that doesn’t take into account the countries where BitCoins are banned (Russia, Indonesia, Argentina, Bolivia, Ecuador) or where the method is restricted (China, Iceland, Taiwan) or BitCoin awareness is low (Latin America). She also accepts “tips” from ChangeTip.

Here’s the video, which was directed by Heap and Michael Lebor, with a choreography by Stephen Hoggett.