This March, legendary Korean band YB will be hitting a few cities here in the United States, headlining two major concerts. It’s already been five years since YB has played a concert in North America, and they’re ready to rock your socks off. 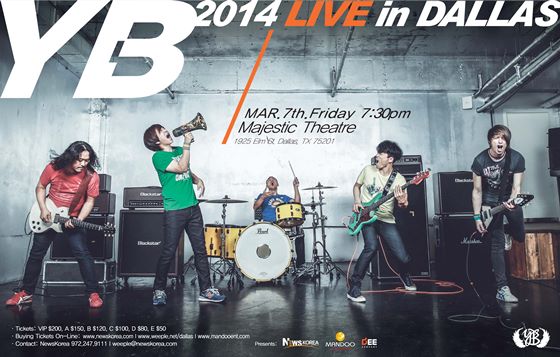 If you are unfamiliar with the band, let us give you a little introduction. YB was formed in 1994 and released their first of 9 studio albums, In Front of the Postal Office In Autumn. From there, they slowly gained in popularity over the years, but finally had a breakthrough in 2002 with the release of the songs Oh, Pil Seung Korea! and Arirang for the 2002 World Cup. After the release of these songs, they skyrocketed into a new level of fame and won  11 national awards, including the 2002 Best Musician award from all three major Korean broadcasting companies. The band is still making music together today,  releasing their most recent studio album Reel Impulse last June.

They launched into international tours in 2005, starting out as the first Korean band to tour Europe. Since then they have participated in SXSW twice, the Vans Warped Tour once and three major concerts in Japan. This year, they’re returning to North America, and are looking forward to expanding their fan base to the southern United States region. They have two solo stops in Dallas & Atlanta, before heading back to Austin to perform as a showcasing artist at SXSW.

Don’t forget to keep an eye out for them at this years SXSW Music festival, between the dates of March 11-16th. The exact showcase dates for SXSW have also not yet been announced, but stay tuned for more info on that as well.