Perfect reason for The Academy to choose Toy Story 3 their Best Picture of the year. To top the huge box office numbers, the massive critic praise, Pixar’s trilogy “legacy”… it would be a huge landmark for animated films if the Oscar was given to the film.

History in the making? Oh-oh~ 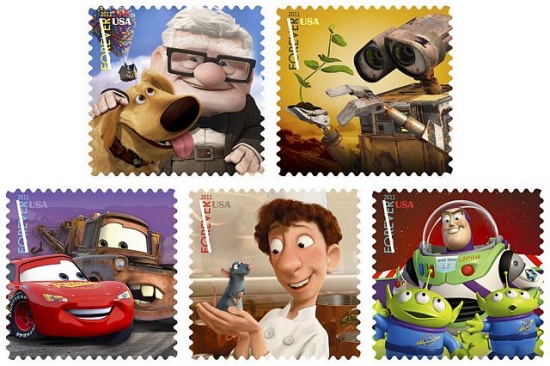 Since 1986, Pixar films have stretched the boundaries of our imagination with stories about unlikely heroes who explore the bonds of friendship and family. Now some of those heroes are the subjects of colorful new Send a Hello stamps that encourage people to connect with loved ones through the mail.

The Send a Hello stamps, which go on sale Aug. 19, are a natural outgrowth of the Art of Disney stamp series issued between 2004 and 2008. Originally intended as a series of three annual issuances depicting friendship, celebration, and romance, the Art of Disney stamps proved so popular that the Postal Service expanded the series to include issuances in 2007 and 2008 to celebrate imagination and magic.

Based on that success, the Postal Service was eager to work with the Walt Disney Company again, choosing to explore the Disney*Pixar films, which offer exciting, contemporary characters and strong themes involving family and friends.

This pane of 20 stamps includes five different designs featuring Pixar characters: Lightning McQueen and Mater from Cars (2006); Remy the rat and Linguini from Ratatouille (2007); Buzz Lightyear and two of the green, three-eyed aliens from Toy Story (1995); Carl Fredricksen and Dug from Up (2009); and the robot WALL*E from WALL*E (2008).

Since the Academy Award for Best Animated Feature was introduced in 2001, all seven Pixar films released since that time have been nominated and five of the seven have won, including Ratatouille,WALL*E and Up.