It’s hard to imagine that a year has already gone by! 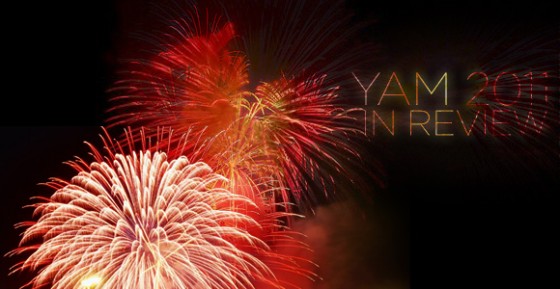 YAM Magazine missed its own anniversary — publicly — on December 15th and we sort of continued working to scout the world wide web for the best entertainment around the world.

It’s hard to imagine how fast the YAM Magazine family has grown, all scattered around the globe with a broad variety of likes, but all gathered together for the love of film, music, and television… and, okay, books, too. Thank you to everyone on the team — Juan, Jay, Marya, Giacomo, Roxanne, Jenna, Rodrigo, Camiele, Peter, Kendra, Marema, Ashley, Gabriela, Diandra, Courtney, Adrienne, Ghost…

Thanks for your hard work, your contributions, your minds and enthusiasm.

Thank you Amy and Julyssa for the hard work you’ve put into making YAM Magazine, a one-stop for all entertainment.