I’ll be there for you… even 20 years later: My love letter to Friends on its 20th anniversary 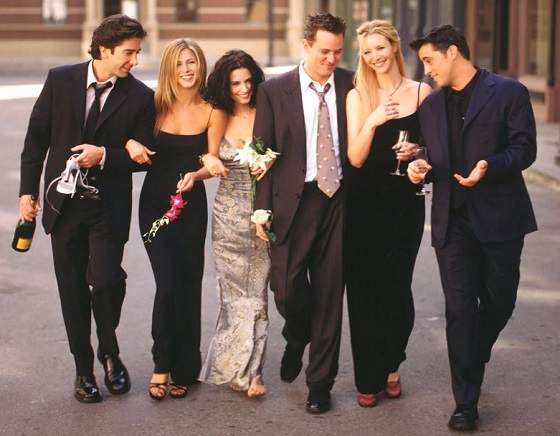 When I was asked to write about Friends, I didn’t know where to begin. How could I possibly summarize my feelings and thoughts regarding one of my favorite tv shows of all time? How could I possibly explain to the world why I think this show is the greatest sitcom ever? (Sorry Frasier, Cheers and Seinfeld fans!)

I ccould have begun this piece by giving the details of its release. How David Crane and Marta Kauffman pitched the idea for a show about a group of friends in their 20s living in Manhattan who had to deal with real issues such as sex, relationships, love, career choices and more at an age in which anything can happen. Or maybe talk about how 6 until-then-unknown actors — Jennifer Aniston, Courteney Cox, David Schwimmer, Matthew Perry, Lisa Kudrow and Matt LeBlanc — brought Rachel Green, Monica Geller, Ross Geller, Chdlaner MURIEL Bing, Phoebe Buffay and Joey Tribbiani to life for 10 years.

Maybe I should have just talked about how I, just like Joey, don’t share food. Or about how I consider myself a version of a princess, just like Rachel. Or about how I enjoy eating as much as Monica does. Or how leather pants or tanning aren’t my thing at all, just like Ross. Or about how I usually make silly jokes all the time, especially during awkward situations, like Chandler does. Or about the times when I say my full name, I feel as if I was giving Phoebe’s “other name”: Princess Consuela Bananahammock.

The thing is… I didn’t know where to begin! So I decided to do it like this. And I decided to tell you that Friends was and still is THE show for me.

Friends is the reference we make that people (and our closest friends) can get, the show that we watch when we feel sad, the first thing we think of when we read the words “pregnancy pants”.  Is the reason why I still want to marry someone like Chandler Bing, the reason why I think “How you doing?” when I see a hot guy walking by; why I try to stay “unagi” all the time, why we know it isn’t Smelly Cat’s fault and why I wish to sing Baby Got Back to a newborn baby. [1]

Friends redefined an era in television and pop culture. It became a part of our society and we remained true and loyal to it, even 20 years later. We can quote entire episodes; we know who Glynnis and Gladys are as well as also knowing who The Holiday Armadillo is. We all cheered when Rachel got off the plane, we cried when Monica proposed to Chandler and we laughed when Joey went to one of his many auditions used bologna to hide the fact that he was circumcised.

This show resonates until this day in all of our lives, from its references to its relatable characters or awkward experiences. We have all been cheated on, we have all struggled in our careers, we have all found love in the rarest places and we all have had friends who have been more like family who have supported us through our mistakes and accomplishments. We have all met versions of a Joey, a Ross, a Monica, a Rachel, a Phoebe and a Chandler. We probably even became versions of them in certain occasions.

Thesee characters allowed us to become friends with them too. Week after week, we sat with them while they told us about their lives, how they lived, what they thought and how they felt. And even today when we catch an episode on cable, it feels like visiting dear old friends.

Friends is a show that captivated our hearts, that made us laugh and cry and enchanted us like no other. With an unparalleled chemistry between the main actors, the show has had an undeniable impact on our culture and will continue its influence for many more years to come.

This is why I love the show and why 20 years after its first release I still love it and watch it. Could I be any clearer?