Rodrigo: Once upon a time, Glee used to be fun to watch. But today, it’s apparent that the show has gotten stale really fast. How did this happen?
Amy: Writing/character inconsistencies… And, I think it’s a general consensus… it’s Ryan Murphy. He does this.
Rodrigo: Based on Nip/Tuck and Popular, yeah.
Amy: I still defend Popular in its inconsistency, though… In any case, didn’t it begin when he began working on American Horror Story?
Rodrigo: Just like how Nip/Tuck went downhill when Murphy started to work on Glee and Eat Pray Love?
Amy: Probably… I never really followed Nip/Tuck to begin with.
Rodrigo: But its worst seasons started to happen around the time Glee was being worked on. American Horror Story started its production in April 2011, just around the time Glee was a few episodes left of ending Season 2.
Amy: I think… I think Murphy has a deep scar (as all Popular fans) when Popular was cancelled out of the blue. Or, I guess… not out of the blue, but we were all duped by The WB then. So Murphy works on extra projects in between his current projects to make up for something… as if creating a comfort blanket in case his show gets cancelled.
Rodrigo: Right now, he has Glee on Fox (moved to Thursdays for S4 after The X Factor US), American Horror Story on FX and The New Normal (starts on NBC in a few months).
Amy: See… after Popular was cancelled in… early 2001, he did some show that wasn’t picked up. And it wasn’t actually until Nip/Tuck that he once again hit it big… 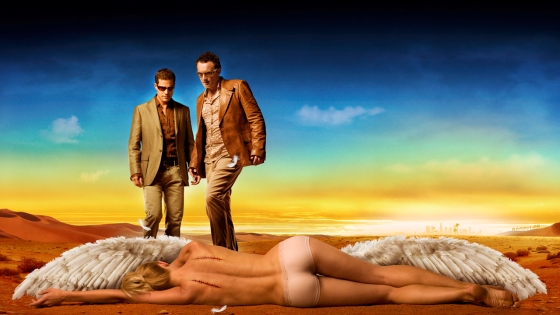 Rodrigo: Haven’t heard about St. Sass, but Nip/Tuck made it hit big for him and FX. Also, Pretty/Handsome (LGBT pilot) wasn’t green-lighted by FX, despite Nip/Tuck‘s success.
Amy: See… Murphy needs a safety blanket, so he does this thing where he sets things up and then preps something else for him. Kinda like J.J.Abrams does, I’ve heard. LOL I’ve read many complaining how awesome his concepts are, but there’s also no consistency.
Rodrigo: Hahaha… Abrams tackles more shows than Murphy, though. 2012 is gonna be a first for Murphy with 3 shows going on at the same time.
Glee is going to be a bigger trainwreck in Season 4, while AHS will cling onto Jessica Lange and Chloe Sevigny for dear life. However, AHS has an advantage for Ryan Murphy. Every season will be a different story. I think it could work for the kind of guy that he is, so he avoids getting bored with his project.
Amy: When did you start disliking Glee so much? And why don’t you just stop watching?
Rodrigo: I Kissed A Girl. Season 1 had Funk as its weakest episode and Season 2 had shitty episodes in Night of Neglect and the Britney Spears tribute. But Season 3 added new writers, and they didn’t knew how to handle the characters. IKAG dealt with Santana’s coming out in a way that was horrid, boring and highlighted Finn as the savior of lesbians.

The cherry on top, Katy Perry’s song being sung to Santana. [1]

Rodrigo: I think you should watch Mash-Up and IKAG to understand my anger.
Amy: I want to save myself the anger… the internet is such a negative place — and by internet, I’m just talking about his and Glee‘s IMDb boards. LOL.
Rodrigo: Add to that the Shelby-Quinn-Puck storyline, Blaine’s overexposition, new writers sucking ass, violent shoving of Finchel, Santana buried… and then, boom!
Amy: The internetz really would be a better place if all those who HATE Murphy just stop consuming Murphy’s goods. LOL
Rodrigo: Or if he died. LOL. Seriously, at this point, Ryan Murphy is better off as a man who should pitch ideas for television shows. As a writer, that’s another story.
Amy: See, you’re part of the problem too, now. If the show is beyond salvation, it’s better to let it go. If Murphy gets bored of his shows, we are allowed to do it too. LOL
Rodrigo: Hahaha… I ended up watching Season 3 just to see how it ends. It’s like watching something being consumed by fire.
Amy: The difference is that fire doesn’t make you angry! There were episodes in Season 2 that made me angry and bored… And then when the beginning of S3 didn’t do anything for me, I just stopped.
Rodrigo: Which ones?
Amy: Well, I was mad at the Britney episode. LOL. Coz it was pointless, and to see Britney allowing that made me sad and mad at the same time.
Rodrigo: Thinking about it, the Britney Spears episode was the first legitimate alarm against Glee.
Amy: Also anything to do with Quinn/Finn/Rachel bored me a lot. And Finn annoyed me.
Rodrigo: Oh, Finn.
Amy: But then, what annoyed me a lot was also the fans AND the anti-fans.
Rodrigo: Ah, the fandoms.
Amy: The first ones because Glee was like the slice bread of grilled cheesus. And the others because everything is so bitter.
Rodrigo: I am lucky to interact with ther smarter fans. If it wasn’t for them, I would have easily dropped Season 2.
Amy: At this point in time, though, the anti-fans seem to annoy me a lot more.
Rodrigo: Friends help sometimes for viewing shit online.
Amy: Anti-fans are the most useless pieces of interweb waste. Such a waste of time just hating on something.
Rodrigo: But I like them sometimes for certain shows and tv characters. Hatred can be fun… sometimes.
Amy: SOMETIMES, they can be witty.
Rodrigo: But you love to hate Seth Rogen.
Amy: Yeah, but I never EVER go into his websites or communities to boast at HOW MUCH I HATE SETH ROGEN.
Rodrigo: Because it sounds sad?
Amy: I can stand him… if the role lets me hate him…
Rodrigo: I used to hate him, now I feel apathy towards him.
Amy: I actually sided with him in Take This Waltz.
Rodrigo: Depends on the character sometimes?
Amy: Usually. And I think he understands that.
A lot of people hated him on The Green Hornet, I didn’t mind him there, because he was an idiot.
Rodrigo: I tolerated him on GH. And it was easier on Paul because I didn’t had to see his face.