The Olympics, NBC, America Television and why Peruvians Have It Worse than Americans

Social Media and the Angry Fandom~

The pitchforks and torches were taken out for a social media uproar. xD

You can check out the hashtag #AmericaTVesunaCagadaenEstasOlimpiadas (America TV is Crap at this Olympics) for recent tweets on the topic. But their Facebook page was inundated with complaints. 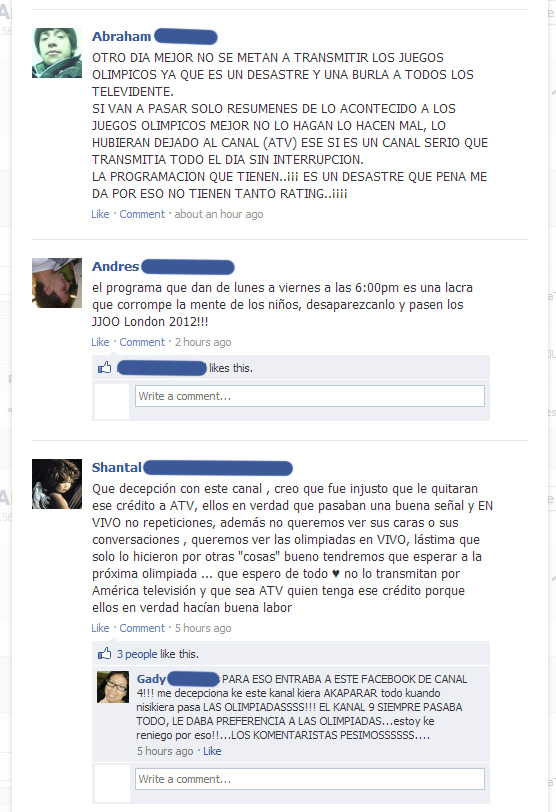 “Next time don’t bid for the Olympic broadcast because it’s a disaster and a mockery to all your viewers. If you are only going to show highlights of what happened during the day, don’t bother, you’re doing it terrible. You should have let ATV do it, that’s a serious channel that broadcasts all throughout the day with no interruptions.”

“The show that you broadcast Monday-Fridays at 6pm is crap that corrupts the minds of children, get rid of it, and start broadcasting the London 2012 Olympic Games!”

“This channel is such a shame, I think it’s unfair that you took away the games from ATV, they really did show that good stuff and LIVE instead of repetitions. Plus, we don’t want to see your face or listen to your chatting, we want to see the Games LIVE. Sad that you did it for other ‘things.” Well, we will have to wait for the next games… that I hope with all my heart that America Television doesn’t broadcast, because ATV did a good job.”

NEXT TIME, YOU GUYS. NEXT TIME. #TeamATVJJOO xD