The Olympics, NBC, America Television and why Peruvians Have It Worse than Americans

It is, after all, all about ratings~

The day of the opening, I tuned into America Television, one hour before the actual show started — and surprise! They were showing their regular programming — an afternoon game show and a poor knock-off of the awful Dr. Oz show called Dr. TV. When the hour went by, I decided to switch over to ESPN, to see if they were showing the ceremony — like they had previously done with the Vancouver Olympics — and the show had already started!

I wasn’t shocked at all, so I watched almost the whole show there.

When the time to present the teams arrived, I took a hike to get some lunch and decided to see what the America Television “team” was doing with the broadcast, as I was seeing already the negative comments on social media about Gonzalo Nuñez and his equally incapable anchor partner. But really, NOTHING would prepare us for what America Television did.

Right at about the most important moment during the ceremony, the ignition of the Olympic Cauldron… THEY DID THIS. 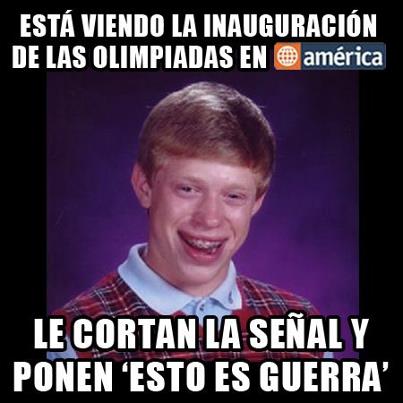 “You are watching the Olympic Opening Ceremony on America. Cut the broadcast to show Esto es Guerra.”

They did the biggest trolling in Olympic broadcast history.