The Banana Guide to Asian Entertainment: It’s All About Japan: Part I

That One Actress – I Am Gone

After I watched All About Lily Chou Chou, and was left emotionally drained from it, I decided to watch this other movie with another simply beautiful poster. 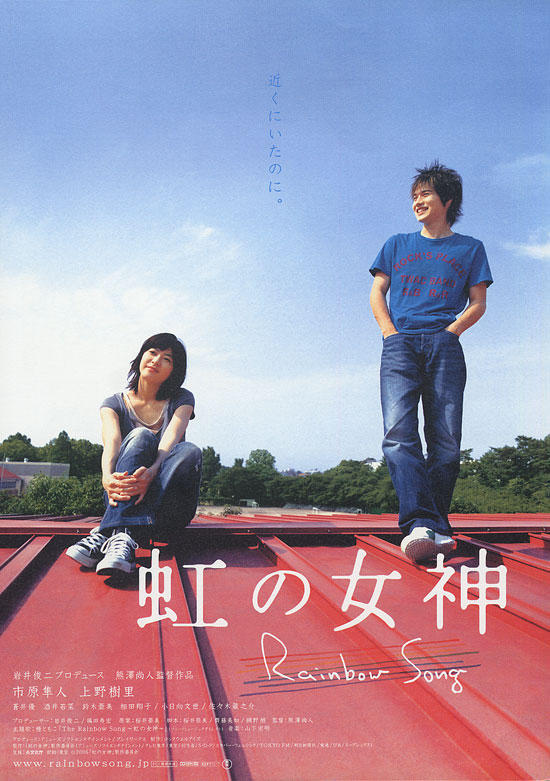 The freedom of the clear blue sky~

When Rainbow Song (虹の女神) rolled its title sequence, I noticed Juri Ueno’s name. I excitedly said, “I know that one! That’s Ruka from Last Friends!” What were the chances of that happening to me, a newbie with Japanese entertainment?

Later I found that the movie had been written by Shunji Iwai under a different name, and I was left with a chick flick that had opened my eyes to the dramatic tones of Japanese romances. Here we had this guy and a girl who met under incredibly awkward circumstances, forming a friendship that was never able to become more than that.

What I loved about watching Rainbow Song was the way we’re introduced to this very traumatic experience at the very beginning of the movie. Juri Ueno’s character is said to have died in a plane crash, but we have no idea who she is or what’s going on, so we don’t feel the emotional bomb until the very end of the film when it’s perfectly played by Hayato Ichihara and Yu Aoi.

As I normally did, I logged on to IMDb to rate the film and noticed that both their names were already visited links. I had no freaking idea that both Hayato Ichihara and Yu Aoi were also the same kids in All About Lily Chou Chou! To my defense, they both look completely different in Rainbow Song, and soon I was looking for more information about the both of them. 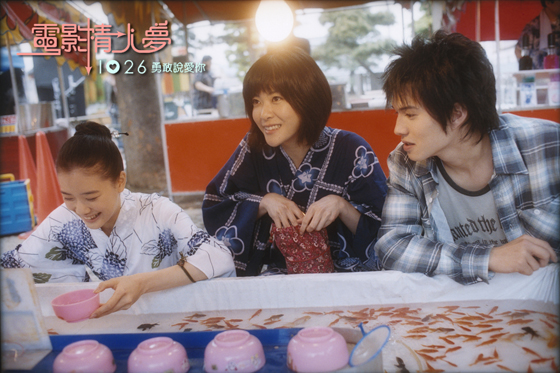 Yu Aoi, Juri Ueno, and Hayato Ichihara on a still of Rainbow Song.

Yu Aoi had the advantage of having worked with Shunji Iwai (with the cinematography of Noboru Shinoda in his last gig) once more — up until 2008 — in the chick flick family drama camouflaged as a youth romance, Hana & Alice (花とアリス).

Though people keep telling me Hana & Alice as a film about two friends who fall in love with the same guy — how pedestrian, huh? — to me the movie was about this young woman who felt so neglected by her divorced parents that she began a relationship with a boy that strained her relationship with her best friend.

The film has two very memorable scenes for me — the first one is the one in which Alice (Aoi) shares with her father, who has come to visit and spend some time with her after she’s entered her new high school. After discussing trivial matters such as the school uniform and classes in between meals and dessert, Alice’s father teaches her to say “I Love You” in Mandarin. The famous “Wo Ai Ni” scene [1] ends when Alice tells her father, “Papa, Wo Ai Ni”, to which he replies with the cold, “Zai Jian.”

I had never in my life seen such maturity and depth in a film marketed towards young people.

Then there was the famous ballet scene — the most mesmerizing and most gorgeously shot five minutes of any film that I could label a chick flick that I had ever seen. I was a goner.

I have watched almost all of Yu Aoi’s filmography [Check my post: Blue Meteor], except for the few that are impossible to find and some others that have no subtitles. But it’s because of her that my knowledge of Japanese entertainment has multiplied, grown and exploded.

It is because of that one Jdrama, that one movie and that one actress that all my interest for all things Asian is what it is today.

Stay tuned to find out what is amazing about Jdrama next!