Slaying the Dragon: From the POV of a Latin-Asian Girl

A couple of days ago, I ran into this clip from the short documentary titled Slaying the Dragon: Reloaded by Elaine Kim, who did a sort of follow-up to the 1988 documentary Slaying the Dragon. The short documentary gives a brief look into Asian Americans and Asians on American media and contrasts it with some of the representation on contemporary films and TV shows. Kind of like a visual piece to my post Asian Americans on American Media written in 2010, but a little more critical.

I had never really thought about race growing up. Attending Peruvian-Chinese school was normal, just as it was to attend Peruvian-Japanese school, French-Peruvian school or British-Peruvian school. In simple world view, they were all private schools, and you would get in one of those because one of them was cheaper than the other, they were closer to home, or a family member attended the school thus making it easier for you. Growing up, I didn’t feel like a minority; I was Peruvian of Chinese ancestry (on one side more than the other),  and though people couldn’t tell me apart from a Japanese person- in the end, everyone just lumped us into the “Chino” category.

I had tons of Japanese descent friends who would be called “China,” and some more who were Peruvian who would be called “China” for merely attending Peruvian-Chinese school, but we never felt outsiders. We had been assimilated by contemporary Peruvian culture (or maybe just Lima), we had all grown having a Japanese-Peruvian president, we had all grown up watching NHK’s programming, including Nopo and Gonta [1] on Dekirukana on national TV. We had grown watching Liveman [1] and Flashman [1] before we learned of the Power Rangers, and we had grown up eating “Chifa” (Peruvian-style Chinese food) at the same time we grew up calling soy sauce “sillao” instead of “salsa de soya,” or calling ginger “kion” instead of “jengibre.”

I don’t know what it was. I don’t know if it was my living in Canada or my sudden access to films and the internet. Suddenly, I felt under-represented. Suddenly I felt I had nowhere to turn to. Not only as an Asian American in Hollywood, but as an Asian Latin American in Peru. I used to didn’t care about El Chino Yufra, but now the sight of him offended me. 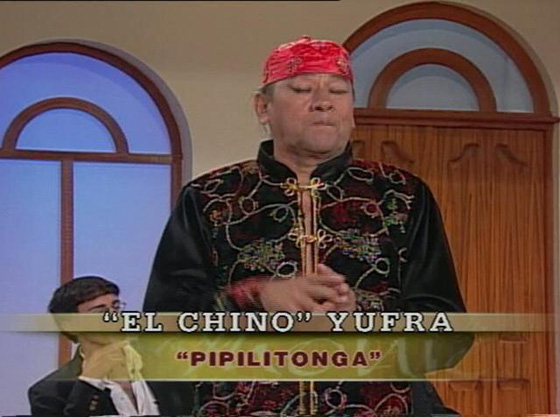 El Chino Yufra ended up playing the Japanese Ambassador on the Peruvian series, Operacion Rescate back in 2010.

Back in 2008 or 2009, there was also a bank commercial that people thought was madly hilarious, in which a Chinese man fresh off the plane talked about “How beautiful ‘Pelu’ was” and “how ‘difelent’ time changes ‘ale’ in here” so that he gets this mad case of jetlag [1]. It was going to be one of the many few Asian stereotypes that still needed work not only down here, but also in America. Just a couple of days ago, during my trip to Cuzco, my (Asian) friend and I were walking in Chinchero [1], when a little boy looked at us and said “Oppar Gangnam Style.” It was my worst nightmare made reality [1].